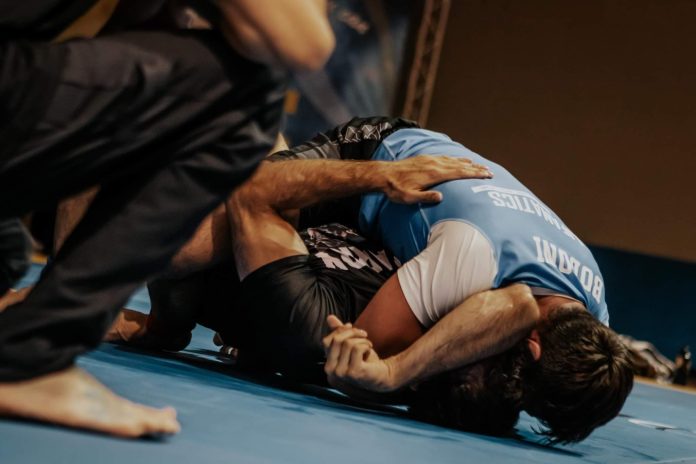 The tournament organization, called ““Twisted Church” is a first of its kind and led by a local pastor and grappler Dave Bever.  The organization’s notion is to merge, somewhat incongruously, faith with violence.  Bever, a long-time staple in the regional martial arts scene, gathered sponsors, partnered with a veteran support group called The Legion Project, and on Saturday night held his third and most significant event thus far.

I reached out to Bever’s partner, Robbie Carter for the full rundown of the event:

ROUND 1 Bodoni submits Jacob Howarth via Inside Heel Hook (0:49)

The undercard certainly didn’t disappoint; a surprisingly technical leglock battle between the two lightweight blue belts Austin Fyffe and Mitchel Pelphrey that resulted in both having multiple good looks at their own Heel hooks before Fyffe secured the submission.

The main attraction was obviously the 16 man. Bodoni looked like the number one seed, submitting his way to the finals in impressive fashion. Brad Schneider proved his number 4 seed with back-to-back submissions over Josh Brown and a lightning-quick 10-finger over Tyler Westlund. Nicholas Craton was by far the surprise of the night with his inside Heel hook finish of Rida.

Elder had 3 wars on his way to finals that left him exhausted. The finals were epic, both men clearly wanting it. With the finish coming down to a “did he pull guard or attempt a takedown?” Conversation. And the question of “Was it three seconds?”

Match of the night might be Daishi Goto and Rene Sousa, with Goto securing a guillotine while down 2 points, getting the tap with only 14 seconds left.”

The controversy of Cruz vs Bodoni has made its way to Gordon Ryan’s instagram, with the current #1 ranked competitor on the planet insisting that his teammate Bodoni was robbed.  Perhaps Twisted Church will host a rematch between these two high-level competitors?

For a full event replay check out the Twisted Church Youtube:
Twisted Church has two events on the horizon, a qualifier for the upcoming Sapateiro Invitational 205lb championship to be held on 7/16 and a 155lbs tournament in October which will boast a $10,000.00 prize.  More details and information can be found on Facebook.