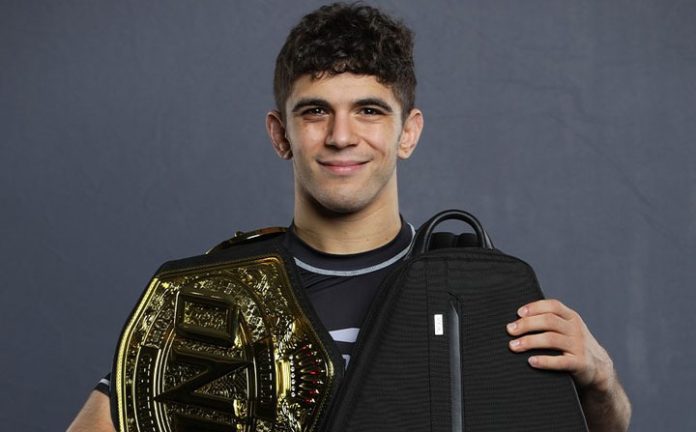 Mongolia’s Gantumur Bayanduuren, the combat sambo star who challenged ONE flyweight king Mikey Musumeci for his submission grappling belt last weekend, is currently nursing a torn ACL, torn MCL, torn meniscus, and broken ankle, according to ONE Championship representatives. The injuries will reportedly put the Mongolian athlete out of commission for at least one full year.

It’s a catastrophic look at the consequences of refusing to tap to fully-locked submissions – which has also soured the taste of victory for Musumeci. “I didn’t really know the correct thing to do,” Mikey told me on Wednesday morning. “I didn’t know if it would be morally wrong to just keep breaking the guy’s leg – but it’s my job to do that, right? I’m supposed to finish the match, and I knew that would finish the match.” With a wince, he added, “What I didn’t know was that the guy was psychotic, and wouldn’t tap!”

It wasn’t until later, that Musumeci realized he could have won without inflicting further damage. To emerge victorious, he’d simply have to let the submission go, stand up, and walk away. “[My opponent] would have had to follow me standing up, and that would have ended the match, because he would have fallen, eventually,” Mikey pointed out.

While we all saw Bayanduuren limp his way to the middle of the Circle after the throwdown with the champ, what most of us didn’t see was the devastating aftermath. “What happened was, he was walking a little bit in the seconds after the match because he still had a little bit of adrenaline,” remembered Mikey. “But when he tried walking down the stairs of the cage, he fell – so they had to carry him out into a wheelchair.”

“Immediately after the match, I saw him in the wheelchair – and again, this is all new to me. It’s killing me inside,” confessed Musumeci. “I feel so guilty, but at the same time, I also feel that it wasn’t my fault. And then another part of me feels like I failed because I didn’t finish the match. Because I had this mentality that I had to submit my opponent, I felt like I let [Chatri Sityodtong] down, that I didn’t submit [my opponent] and finish the match.”

In fact, when Sityodtong arrived to award Mikey his belt, Mikey actually apologized to the ONE CEO for his performance. “I put a lot of pressure on myself, and I felt like I failed because I didn’t finish the match,” said Musumeci. “And then I felt like I failed because I hurt [Bayanduuren]. In a perfect world, I compete with my opponent, and then right after, they’re normal. They can walk, they can train. This is not supposed to be about hurting the person.”

According to Musumeci, the two exchanged Instagram messages in the aftermath of the injury. “Why are you not happy that you win?” Bayanduuren wrote to Mikey. “You have no other chance of winning against me.”

“I was not happy, because I had to injure you to win,” Mikey wrote back. “I didn’t want to injure you, dude, I respect you and admire you a lot. I felt bad and regretted expecting you to tap, so you don’t hurt yourself. I should have chosen to choke you in the beginning instead, so it wouldn’t have been your choice, and then you wouldn’t have this injury now. I felt / feel guilty.”

To which the Mongolian simply responded: “You don’t need to repent. Everything has a sacrifice.”

Musumeci can’t bring himself to agree with that attitude, and confessed to feeling shaken by the entire ordeal. “It brings out a part of jiu-jitsu that I honestly hate – the dangerous part of it,” the champion explained to me. “I train very safely – there’s no danger. The energy of how I fight, even, is not dangerous. Even when I’m applying a submission to break a knee, I’m not in a mean, malicious state – I’m in a nice, friendly state, and I’m trying to just gently apply pressure to get a submission tap! But he wouldn’t tap!”

“So then I just got into this crazy mindset where I felt like I was cutting a human leg off their body while they’re still alive. Like, I felt insane. I was just very disturbed from the match overall. Imagine you’re in a match in real life, and you have a knife, and they tell you that you have to cut this person’s leg off. That’s what it felt like in my mind. And I felt it keep ripping, and ripping, and ripping.”

“I might get a choke kick for a while – and only go for chokes,” he confided. “I’ve been training every day since the match, and every time I do a joint submission – if I even touch a heel hook – I freak out.” He recognizes the reaction as something of a trauma response, which may take some time to overcome.

In happier news, Mikey’s looking forward to his next title defense – which will likely take place during ONE Championship’s US debut. “It’s not official yet – I haven’t signed a match contract yet – but most likely, I’ll be on the main card in the US,” said Mikey.

“My whole bracket my whole life has just been me and Brazilians, so getting the opportunity [at ONE] to fight all these guys from different countries has been amazing,” enthused Mikey. “Imanari from Japan, Cleber from Brazil, Gantumur from Mongolia – and now, fighting Osamah, from the Middle East, from a whole new continent – that’s so important to the sport of jiu-jitsu, to have growth like this. So I think that’s the match to make, and I think it’s perfect.”

While Mikey has no current plans to take on fellow ONE submission grappling star Kade Ruotolo, who sits a couple weight classes above him, he believes that a match against Osamah would be something of a love letter to the fans who have been clamoring to see Musumeci versus Ruotolo. In some ways, it may just be the next best thing, given that Osamah is a teammate and training partner to both twins.

“He’s literally going to do his camp with the Ruotolos,” explained Mikey. “You know that he’ll be ready for the match after training with the Ruotolos, who are the best right now. He’ll definitely be prepared.”

Jiu-jitsu matchmaking aside, Mikey’s also promised a little show for his fans during his US walkout. “One thing I’ll say is, in May, I promise that when I walk out, I’m going to do a dance,” said Mikey, with a wide grin.

Does that mean that Muay Thai star – and originator of the “Stamp Dance” – Stamp Fairtex, who once famously tried teaching Musumeci how to twerk, will be part of this particular training camp?

Mikey laughed. “Possibly – yes. She’s my dance teacher! So, we’re going to get me ready, and in May, I’m not going to run to the Circle as fast as possible because I’m so nervous – I’m going to dance.”

Is it going to be a Darth Rigatoni-style take on the Stamp Dance?

“No, no, no – I want to do Cotton-Eye Joe,” exclaimed the champion. “It’s in America! So I’ve got to do some cool American dance. I think fans will get a real kick out of me dancing. I’m super white, so I don’t have any dance skills. I don’t have the coordination, but I’m going to prepare.”

And with luck, this time, everyone’s knees will survive intact.