The UFC Hall-of-Famer announced his new goal on Instagram, accompanied by a 300-themed video comparing himself to “other Hawaii politicians.”

“I’ve made a lot of mistakes in my life but I would never run from a fight or sell out my people. As soon as I step into Hawaii’s Governor office I will remove All new federal and state mandates that have been hurting our economy, residents, and ‘ohana. We will get the best doctors, medicines, therapies, and health care the world has to offer to fight this pandemic and always keep Hawaii among the safest and healthiest states in the union. We will get rid of all vaccine passports. Hawaii will be a vaccinated with Aloha and Unvaccinated with Aloha policy for everyone. Same with the masks 😷. We will follow the constitution to the tee 👌. I am not here to fit in with the other politicians, I am here to get our freedoms back!”

Penn has shown his support for both former U.S. president Donald Trump and Brazilian president Jair Bolsonaro on social media.

Penn’s campaign announcement follows multiple years of controversy and run-ins with the law, including multiple street fights and a single-car crash that led to a DUI investigation. 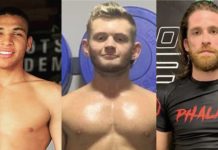