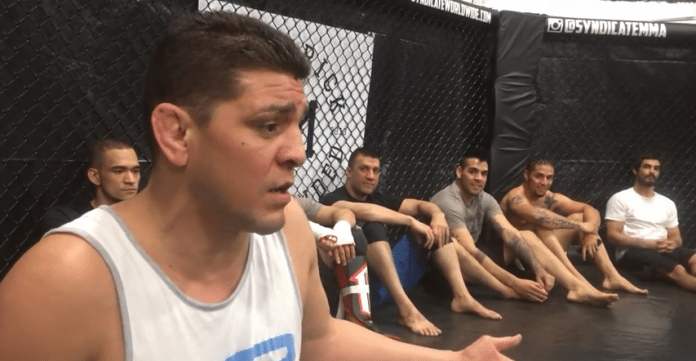 Everything about Nick Diaz’s 2018 arrest was total BS. And there’s proof.

Recap: Jiu-jitsu and UFC middleweight fighter Nick Diaz was arrested in May 2018 on charges of domestic battery and felony battery by strangulation after his on-again-off-again girlfriend called police to report abuse in Las Vegas. A somewhat unbelievable twelve police cars were dispatched to the dispute, where police claimed that Diaz was “hostile” and arrested him as a Code 5. (Code 5 = “unruly suspect.”) Those details were spotlit in the media narrative of the incident, which included erroneous reports that he slammed his victim to the ground while “coked up.” Nick Diaz, hostile and combative criminal, arrested for choking out woman, was the tone.

The incident raised red flags about Diaz’s mental wellness and character, again. The New York Post called him “disgraced,” while angry UFC fans took to social media. The UFC was forced to make a statement disavowing domestic violence and promising to review whether Diaz was in breach of his contract. Diaz, who had recently been reinstated to fight in the UFC after the organization decided marijuana isn’t actually a PED, had been gearing up to return to the ring before the whole Vegas shitshow went down.

This week MMAJunkie revealed unedited body cam footage from the May 24th arrest which shows everything reported about that incident—from the crime itself to police claims of hostility on Diaz’s part—is nonsense.

We already know the case itself was dismissed in August 2018…though most of the major outlets which reported Diaz as an alleged domestic abuser never ran the update that he’d been cleared by a formal investigation. (Evidence reportedly suggested the accuser was bruised prior to showing up uninvited to a house where Diaz was, later calling police to claim the bruises were caused by the fighter after arguing with him. A grand jury refused to indict Diaz, and the prosecutor’s office could find no reason to proceed.)

“I work too hard to do anything wrong,” Diaz had told officers who arrived on the scene that night. “I didn’t do nothing wrong.” Video shows that’s accurate.

Diaz did pull a maneuver to get his cuffed hands back in front of his body after they had been latched behind him, but that’s hardly hostile behavior from someone who dissembles other human beings in public for a living. MMAJunkie also reports that “Former LVPD public information officer Jeffrey Willis, who also screened the footage, said nothing he saw indicated Diaz had done anything to warrant a Code 5 classification. Willis speculated it could’ve come from a confrontation at the detention center, which had been a part of initial reports about Diaz fighting officers there. The detention center does maintain a video surveillance system, but the footage is not public.”

Otherwise, the only potentially unruly behavior comes from the officers. Some have guns drawn before they address Diaz, and one asks “I wonder if his UFC skills are any match to my kung fu powers” as they approach. (Another replies, “Kung fu taser powers?”) Diaz presents himself to police when asked, looking sleepy with his hands up. He’s cuffed and put in the car. Eventually he gets frustrated and starts cursing as he’s sitting in the back of the car, since his ex-girlfriend is free outside claiming that he beat her and he’s cuffed in a police cruiser.

“Listen to me real quick,” Officer Bryce Martinez says, addressing the other officers present in the footage at one point. “I need you to control your suspects…if you need to hobble them, if you need to whoop their (expletive) ***, you whoop their ***. You hear me? I need you to hold and take them. Make those decisions for me. I cannot be making them for you, OK? Good talk.”

Neither Diaz brother has ever had much interest in being seen as a wholesome good guy. They Stockton Slap people, curse on the mic, troll on Twitter, brawl, and test positive for weed. But in this case the “bad boy” seems to be owed an apology by pretty much everyone. And that would include us at JJT, since we reported what the police shared with the media back in May just like everyone else.

The complete report from MMAJunkie, which deserves props for both originally requesting the body cam video and clarifying their initial report of Diaz as a hostile arrest, is available for review here.

PS: Footage like this is why fighters should care that police are now dropping the use of body cameras altogether. As martial artists and fighters, some people will be assumed guilty before proven innocent. Body camera footage prevents that kind of assumption from putting someone who has done nothing wrong in jail.