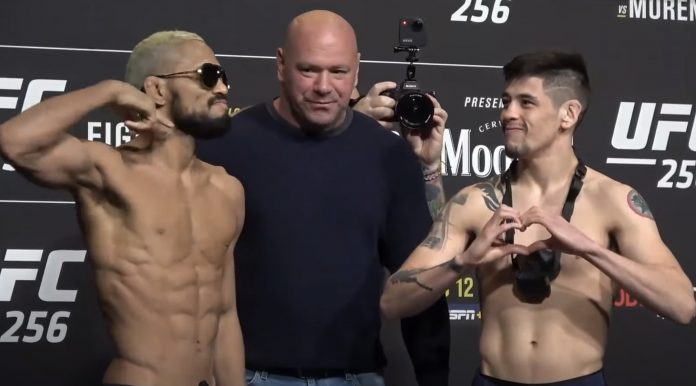 On December 11, current UFC flyweight champion Brandon Moreno will face off against former champ Deiveson Figueiredo in a trilogy fight at UFC 269.

ESPN was the first to report the news.

The fight will serve as Moreno’s first title defense since he claimed the belt from Figueiredo back in June, submitting him with a rear naked choke in the second round of their rematch. Moreno, who was promoted to black belt in BJJ back in February, originally challenged Figueiredo for the title in December 2020. The athletes fought to a draw in an action-packed back-and-forth bout, and Figueiredo retained his title.

Prior to his first fight with Figueiredo, Moreno was on a three-fight winning streak dating back to 2019.

Figueiredo, for his part, won five straight fights before facing Moreno for the first time. He claimed the flyweight title in July 2020 against Jason Benavidez, defending it against Alex Perez in November that same year.

This will be the second major fight announced for UFC 269 — previously, a title fight between lightweight champion Charles Oliveira and Dustin Poirier was announced and is expected to serve as the main event of the card.