Damien Anderson has kicked off 2023 with a bang. We may only be a few weeks into the new year, but the B-Team star wasted no time getting down to business, so far as his career is concerned. He already has an MMA debut booked for the end of the month, continues to co-host hit podcast The Simple Man Podcast – and, in a move sure to excite grappling fans on the East Coast, he’s opening up a brand new location for B-Team in New Jersey.

“My gym in New Jersey is moving to a bigger location – we’re remodeling the whole thing, and it’s going to be a very pristine-looking gym,” Anderson told the Jiu-Jitsu Times on Monday. “And it’s actually going to be B-Team New Jersey.

“We’re rebranding as B-Team New Jersey, and we’ll be the first ever B-Team gym outside of our headquarters in Austin, Texas.”

The rebranding process has involved a complete revamp, which will allow for appropriate space and facilities. “There’s so many moving parts right now,” marveled Anderson, grinning. “We have to get new mats, new wall mats, new signage. We’ve got a new logo, ‘B-Team New Jersey,’ and the websites and social media need to get changed – so everything’s kind of moving all at once.”

So, when does B-Team’s first ever satellite gym launch? “We’re going to be officially ‘B-Team New Jersey’ on February 1, but we won’t have the grand opening until a month or two after that,” confirmed Anderson. “We’ll probably have Craig [Jones] or Nicky Rod come in for that.”

“Obviously, the big hole in my game – when you look at complete fighting – is going to be my striking,” said Anderson. “So I’m pretty much striking more than I’m doing jiu-jitsu right now. I’m still doing jiu-jitsu every day, but I’m striking sometimes twice a day, especially with multiple classes back-to-back.”

Anderson’s MMA journey started back in the Danaher Death Squad days, where he used to train with John Danaher and jiu-jitsu phenom turned current ONE Championship MMA star Garry Tonon. While Anderson’s move over to B-Team necessitated some changes in his training makeup, he believes it was ultimately for the best.

“I switched camps from New Wave to B-Team, and for that year, I pretty much only wrestled, because ADCC Trials were coming up – and that was a big hole in my game as a jiu-jitsu player, as well as an MMA fighter, my ability to get someone to the ground” he explained. “I had great ground grappling, I had halfway decent striking, but the interplay – what we call shoot boxing – is where I had that huge hole.” That year prepping for Trials with B-Team, however, closed that gap neatly with some extremely dedicated wrestling practice.

As for striking, Anderson’s already proven he’s got some heavy hands, thanks to a viral TKO win in combat jiu-jitsu. For the B-Team star, an amateur debut in MMA represents an opportunity to continue showcasing some of his growing striking prowess.

“For this fight, if things went ideally, I’d honestly want to make this a striking battle,” confessed Anderson. “I’ve been developing my striking for a few years – starting from when I was with John and Garry – and now I’m at a pure Muay Thai gym, where I’m really honing those striking skills. I really want to give that a test, especially since this is an amateur fight for me.”

Anderson sees his first amateur fight – and hopefully, according to him, his last before he turns pro – as an opportunity to deviate from his comfort zone, and experiment with what does and doesn’t work for him in an MMA context. “Obviously, I know that I’ll be able to out-grapple the guy, because I’ve had to compete in world-class grappling – but if there’s anything I need to work on in other parts of my game, this is where I want to test that out: at the amateur level, when there’s no risk. This is where I should be trying to stand, and see how my striking compares to this guy’s.

“So, I have my ideal scenario, which is honestly pure striking – maybe get my opponent tired through some grappling. And then the second layer, once I get comfortable striking, is testing out my new skills by striking into takedowns, using shoot boxing. And then, once I get him to the ground, we’ll start using our grapple boxing.

“For me, it’s really more of a feeling-out process for all the skills I’ve been developing. That’s how I see this fight.” The way Anderson sees it, the last thing he wants is to skate by the amateur level on superior grappling skills, only to discover in the pro leagues that his striking remains deficient.

He’s also found himself drawn to his new Muay Thai gym’s unique system of pedagogy – which is not unlike Danaher’s highly analytically-focused approach to jiu-jitsu. “I happened to find Ambush Muay Thai – and in my opinion, the coach, Elton Wells, will eventually be considered one of the best Muay Thai or striking coaches in MMA. He’s one of the most intelligent guys I’ve come across.”

“I had a sit-down [with Elton], and – he’s a computer programmer, also – he explained to me his system of fighting. He has it written down, and it’s this intricate system. At first glance, I thought it was kind of insane, but when he broke it down, I realized that what he was showing me was an intelligent way to fight – and if something goes wrong with my fight, he can actually go back into that system, show where I went wrong, and now I can adjust and problem-solve.”

Anderson believes so strongly in Wells’ system that he travels 45 minutes every day just to train at Ambush Muay Thai. “It’s a real hidden gem,” said Anderson. “And I really believe that, give it a few years, and [Wells] will be considered one of the greatest striking coaches.”

It’s all part of a decidedly thoughtful approach to the building blocks of Anderson’s ongoing combat sports career. “My real goal is to build a brand – build a following, essentially – safely, through jiu-jitsu and social media,” Anderson elaborated. “And then I’ll get my early pro fights, and once I’ve built a good following, and it’s time to take the next step, I’ll hopefully have some leverage – some bargaining power, where I can negotiate a higher worth [to an MMA promotion], based on the [jiu-jitsu] following that wants to see me fight.”

Building a brand through jiu-jitsu has a lot of appeal for someone like Anderson, who’s already an accomplished and popular submission grappling athlete. It also helps him preserve his brain health, in that he gets to build a legitimate – and highly transferable – combat sports resume without taking constant blows to the head.

MMA fights and jiu-jitsu matches aside, Anderson recognizes how important branding and marketing are to an athlete’s success. That’s part of what motivated him to launch The Simple Man Podcast alongside teammates Ethan Crelinsten and Nicky Rod. Ostensibly a talk series from three high-level athletes about their chosen sport, the show’s really about three guys with hilariously authentic chemistry chatting everything from ADCC, to embarrassing dating stories, to intricate pranks pulled during a misspent youth.

“I always wanted to start a podcast – it’s a funny running joke, where Craig always talks about how I like to hear myself speak,” said Anderson, with a laugh. “And I do talk a lot! But me, Ethan, and Nicky Rod have always had these joking personalities, and this joking dynamic – where we’re always shooting the s**t and cracking up.”

It was the perfect recipe for a podcast, which came together with organic ease for these three. “It’s a different format, because we’re not interviewing – we don’t really have set topics to talk about,” said Anderson. “We don’t even like to talk that much before the camera starts rolling because sometimes, if we get in and start talking, we start cracking up, and then the camera’s not even on, and we’re like, ‘S**t, we just missed that whole thing, and it was organic laughter!’’

“So it’s really just personalities meshing – the three of us just really like to crack up and be funny. It’s a good dynamic because Ethan’s super funny, Nicky Rod’s personality is funny, and I feel like I’m the talker that can push the conversation.”

Authenticity is key, for Anderson, Crelinsten, and Rodriguez. “I think it really brings high value to our fans,” explained Anderson. “Because we are on camera, but it’s the most organic way to go about listening to us. There’s no questions being asked. It’s just us shooting the s**t. None of us put on a fake persona.”

As much as they love to goof off, they’ve also put real work into building a fanbase for The Simple Man Podcast — and with it, the B-Team brand. “None of us are very short-term thinkers,” Anderson said of his teammates and co-hosts. “Anything that we do, we believe that it’s going to succeed. Doubt doesn’t really come to mind.”

It’s an attitude that should serve them in good stead, as B-Team continues to expand its footprint on the jiu-jitsu world and beyond.

To try out a few episodes of The Simple Man Podcast, check the show out on YouTube or Spotify.

And finally, to keep up with all things Damien Anderson, follow him on Instagram – and don’t forget to tune into his MMA debut at Fury Fighting 73, on January 29 in San Antonio, Texas, streaming from UFC Fight Pass starting at 5:30 PM CST. 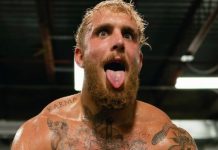