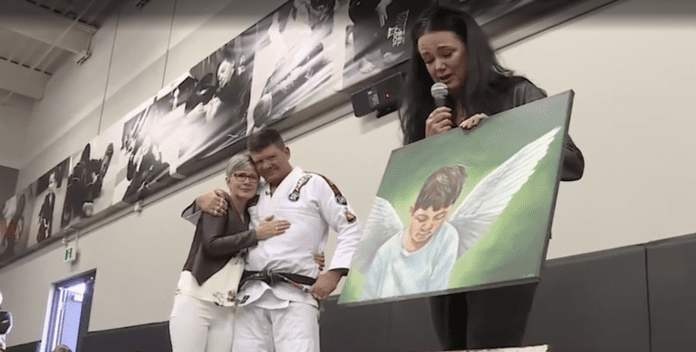 Sure beats shots, cake pops, and Post Malone remixes at the local bar.

Edmonton-based black belt Hal MacDonald rang in his 60th birthday in an admirable but non-traditional way, grappling with sixty party guests over the course of a single hour at Canada’s Rodrigo Resende Academy. The endurance feat was a fundraising effort for a group called Little Warriors, a regional charity which works to protect and heal victims of childhood sex abuse.

The birthday event drew athletes from over a dozen gyms and 100 enthusiastic spectators who reportedly cheered on Hal as he celebrated his birth by giving back. MacDonald explained to CBC news that his involvement with the charity was inspired by family trauma–his own sister, Donna Saskiw, was abused by a neighbor when the two were children.

“I’m not surprised that he’d do it because that’s who Hal is,” Saskiw told CBC, explaining that family support helped her heal in ways that those who are not believed, or who lack access to recovery tools, struggle to. “I’m one of the lucky survivors. I had support. A lot of them don’t.”

“It’s overwhelming,” MacDonald said. “I hope everybody in their life gets to feel this, but it’s not about me, it’s about the kids.”

And PS? It’s not the first time Macdonald has made the news for his do-goodery. Just a few years ago, he was lauded for helping subdue a suspect who was scuffling with law enforcement on the side of the road.