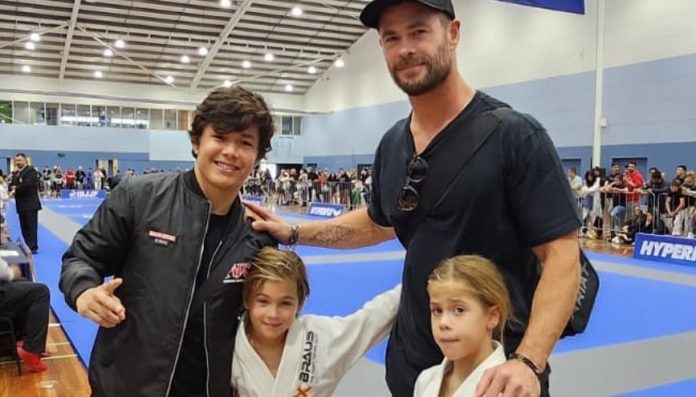 Between Tom Hardy and Mario Lopez’s competitive performances on the mats in recent months, jiu-jitsu tournaments are having a bit of a moment in the celebrity spotlight. The Hemsworths appear to have joined in on the wave, with Marvel’s Thor star Chris Hemsworth entering his sons Sasha and Tristan in the Pan Pacific kids’ division.

A post was published on the official IBJJF Instagram account over the weekend, showcasing a photo of Hemsworth with both boys – along with coach Thalison Soares, who trains the children, and has been cornering them at tournaments. The caption reads, “Chris Hemsworth is at the Pan Pacific with his sons Sasha and Tristan Hemsworth. Awesome to see Thalison Soares coaching his students!”

The Hemsworth children appear to have been involved in the sport for at least a few months now. In a post on the actor’s Instagram account from September, Hemsworth tagged Soares’ account, and wrote, “Super proud dad moment watching my kids at their first jiu-jitsu tournament. Big shout out to coach [Thalison Soares] for his amazing leadership and support with all his students.”