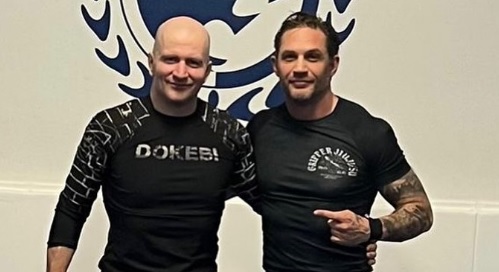 In the meantime, the actor has been brushing up on his game by training with none other than John Danaher himself. In an Instagram post published on Danaher’s account over the weekend, the DDS mastermind captioned a photo of himself with Hardy in rashguards, “Jiu jitsu with Mr Tom Hardy: The team had a blast training the last two days with the great English actor Tom Hardy, who is also a talented jiu jitsu player!!”

The caption goes on to discuss Hardy’s volunteer work with REORG Charity, which is dedicated to veteran welfare. Danaher explains, “Jiu jitsu is often useful as a means of getting soldiers back together in a healthy environment that builds the old camaraderie they had in a civilian setting and can help smooth the transition back home.”

Danaher concludes the caption with praise for Hardy as both an athlete and a person: “He is a very kind man and a really great representative of jiu jitsu.”