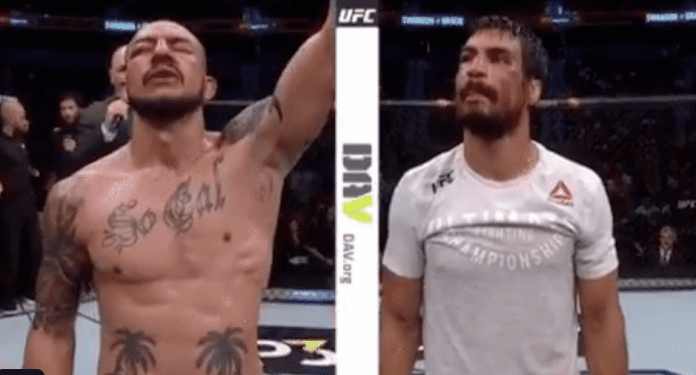 It was a rematch of sorts, and neither Kron Gracie nor Cub Swanson pulled any punches. In fact they threw a lot, with each landing over 100 total strikes and throwing over 200 before the final bell at UFC Tampa. This time, however, Swanson came out on top.

With Rickson himself in his corner, relative MMA newcomer and major jiu-jitsu legacy Gracie took on UFC veteran Cub Swanson for the first time since defeating Swanson at the US Open years ago. As the prefight media narrative goes, it was Gracie’s victory at that tournament which motivated Swanson to move to MMA, fueled by righteous indignation over what he felt were the Brazilian judges’ unfair bias in favor of Gracie.

There wasn’t much grappling to speak of in the battle of the black belts. Instead, the two stood up and brawled for three full rounds, throwing grueling abuse at each other:

Gracie started the second round looking strong, alternating between standup attacks, kicks, and guard pulling. Swanson was able to answer, however, and both fighters ended the round bloodied and looking like fatigue was starting to creep in.

The third round showed the audience behind both men, as they slugged it out to the point of swollen, muscle fatigued exhaustion. There may not have been the big grappling exchange jits fans craved, but it was an entertaining and impressive display of grit none the less.

The win is Swanson’s first after a four-fight losing streak. Gracie’s pro record now stands at 5-1.