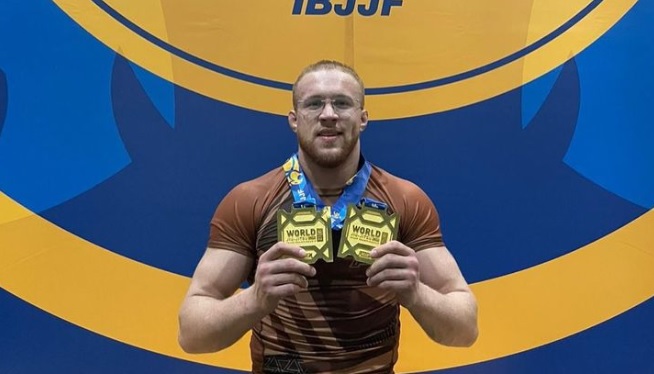 Steffen Banta ruled the brown belt circuit this past competition year. Banta, ranked the number one pound-for-pound brown belt in 2022, took home double gold at No-Gi Worlds this month, sweeping both his own division and the absolute. It’s a fitting cap to an extremely successful year: the Alliance star has gone undefeated for his last fifty matches, including both gi and no-gi. Along the way, he’s earned gold in the gi at both Worlds and Pans, plus double gold at Euros in no-gi, and collected superfight victories over some excellent black belt competitors, including former Euros champ Igor Schneider.

Given those accomplishments, it’s no surprise that the brown belt division will soon need to crown a new king, since Banta earned a very well-deserved black belt from his coach João Gabriel Rocha this past weekend. The promotion makes Banta only the second ever black belt under Rocha, the first having been Rocha’s brother Pedro.

“I’m very excited to take the next step and continue working hard,” Banta tells the Jiu-Jitsu Times. “I hope to repeat the history I made at brown belt, but this time at black belt.”

Never content to rest on his laurels, Banta’s already putting his nose back to the grindstone – not just for his own sake, but also for that of his coach and teammates. “I have a lot of work to do, and I’m looking forward to pursuing new goals, and dreams, alongside my team, Alliance, and Professor João Gabriel Rocha,” says Banta. “One of our dreams is to close out some big tournaments, and I will do everything to have these moments together.”

As an elite brown belt, Banta’s already had the opportunity to test himself against some of the sport’s biggest up-and-comers, including New Wave star Luke Griffith, who faced Banta in the finals of the absolute at No-Gi Worlds.

Banta, for his part, maintained a relaxed mindset going into their match. “I believed in myself, and trusted the work that I had invested in myself during the camp for this tournament,” he says. “I was aware that Luke had dangerous leg locks. But I felt confident in my defense, as well as my offense.

“In the moment that a high stakes match takes place, you must have complete belief in yourself and your strategy. I love to fight, and I enjoy testing myself against other high level opponents. I overcame some adversity in the finals, and I showed a championship caliber level of heart and composure.”

According to Banta, his toughest opponent in the past year was Atos’ Nico Maglicic, the Pan-American open weight champion. Though Banta ultimately emerged victorious from both their matches, Maglicic gave him a true war both times. Banta describes their rematch – in the finals of the super-heavy division of Worlds, no less – as a battle of attrition.

“I learned a lot about myself in that match,” Banta reflects. “Winning the world championship in the Walter Reed Pyramid in Long Beach is always a special feeling. And it has been a dream of mine, to repeat this moment, since I won my first gi world title as a blue belt.”

What’s particularly impressive about Banta is that he’s balanced a highly active – and unquestionably dominant – competitive career with academic obligations as a full-time college student at Southern Methodist University in Dallas, Texas. “I’m in my senior year, and will graduate in May with a bachelor’s degree,” Banta confirms.

He’s hopeful that his success will inspire others to chase their competitive goals in jiu-jitsu without sacrificing a rich and meaningful life off the mats. “I want to inspire others to pursue their dreams, even if they work full time, are in college, or have other huge responsibilities,” he explains.

To that end, what wisdom does he have for other ambitious grapplers coming up through the color belt ranks? His advice is straightforward: “Get with a good coach, and surround yourself with likeminded people. Choose people with the same dreams [and] aspirations.”

“Everyone trains hard, and everyone wants the big titles,” he points out. “Doing the stuff others won’t do is how you separate yourself from the pack. And surrounding yourself with other outliers forces you out of your comfort zone, and into the next gear.”

Strength and conditioning is also a major component of Banta’s personal success. “Getting a professional strength and conditioning coach has been a huge advantage to me, these last two years,” he says. “Currently I’m under the tutelage of Ronnie Incerta [of] OakFit, and he has helped me tremendously as I pursue my goals – especially in the last year.

“Being consistent is another huge factor. I know a lot of guys who have incredible potential but don’t put the road work in. You have to put in the work to reap the rewards.”

At the end of the day, for Banta, it all comes down to willpower and perseverance. “My martial arts mindset, now more than ever, influences every other aspect of my life,” he says. “Living with the mindset of a champion is much better than winning any specific title or championship.”

To keep up with Banta’s career – and highly anticipated black belt debut – be sure to follow him on his Instagram, where he makes a point of responding to all messages.