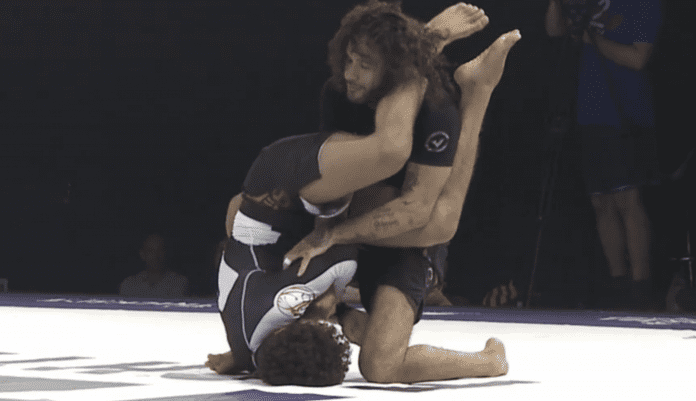 Fight 2 Win 156 brought another action-packed night of jiu-jitsu to Philadelphia with dozens of exciting matches throughout the evening. When it was all said and done, rising star Samuel Nagai had improved his F2W record to 7-0, and Kennedy Maciel had brought home a highly technical win against F2W no-gi bantamweight champ Junny Ocasio.

Both competitors started the action by pulling guard. Nagai came up on top and then sat back for a toehold, which he wasn’t able to finish. Nagai and Andre both then went on the attack for footlocks, ending up in a straight ankle lock standoff, though both ended up abandoning their attempts when they proved unsuccessful. Andre came back on top, and after spending a short time in Nagai’s guard, he again sat back for a straight ankle lock attempt. Nagai defended it well and shot for a triangle attempt, but Andre avoided danger. Andre came back on top while Nagai worked spider guard, easily avoiding another straight ankle lock attempt from his opponent. A quick scramble led to a toehold attempt from Nagai, which was soon countered with straight ankle lock and toehold attempts from Andre. As the clock wound down, both athletes struggled to finish their respective submissions, but neither was able to get the tap before time ran out.

The referees awarded Nagai the unanimous decision, adding another victory to his undefeated F2W record.

Ocasio immediately pulled guard and wrapped up one of Maciel’s legs. Maciel stayed on his feet and was able to extract his leg, soon making a quick transition to side control. Ocasio managed to recover his guard, and Maciel toyed with a straight ankle lock attempt on his opponent as he worked to pass. Maciel then used a double-under pass to get to Ocasio’s back, then coming around for an armbar. Though Ocasio tried to stack his way out of Maciel’s armbar attempt, Maciel was able to control his posture, extend the arm, and get the tap with just over six minutes to go.