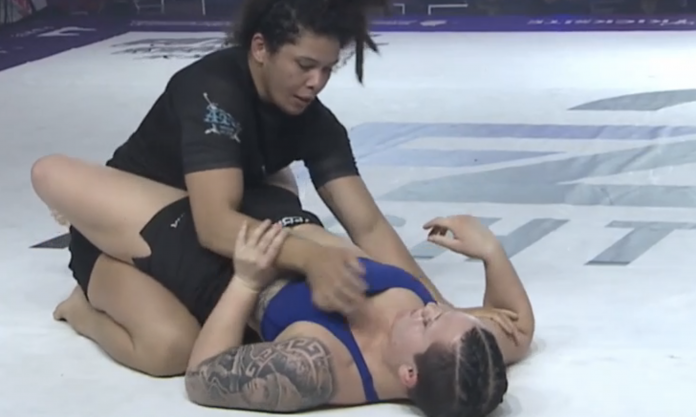 After being rescheduled and relocated due to new COVID-19 restrictions, Fight 2 Win 158 finally happened, featuring some seriously impressive local talent in addition to major jiu-jitsu stars on the famous stage. The night was capped off with a no-gi welterweight title match between notorious submission machine Elisabeth Clay and 2020 No-Gi Pans open weight champion Rafaela Guedes.

Trovo pulled guard and worked his legs up Luna’s body, working a lapel for a choke. Eventually he gave up on it, and Luna used the opportunity to base out and try to open the guard. In the last few seconds of the match, Luna managed to get the guard open and made a last-ditch attempt to pass, but Trovo held him off until the bell.

Clay immediately pulled guard and defended against a headlock from Guedes, who then tried to knee-cut through Clay’s guard. Clay stayed safe and pulled Guedes into her closed guard as Guedes tried to pass. Guedes managed to posture up, and Clay released her closed guard and resumed playing open guard to keep Guedes at bay. Clay pushed forward, and Guedes dropped down for a headlock, ending up in Clay’s closed guard again. Clay moved up and worked for rubber guard, but a small slam from Guedes thwarted her attempt. Guedes slammed her again, and the two battled back and forth, with Guedes trying to posture up and break Clay’s hold on her while Clay tried to move up on Guedes for her signature attacks from rubber guard and high guard.

With under three minutes left, Clay opened her guard, and the competitors hurried to their feet. After some hand-fighting, Guedes got a body lock grip and threw Clay to the ground. Clay escaped from side control and pulled guard with about a minute and a half left, trying to trap Guedes’ head with an overhook and working her way to high guard. Guedes got out of Clay’s closed guard, and time ran out as Clay tried some last-minute attempts to work attacks from beneath her opponent before time ran out.