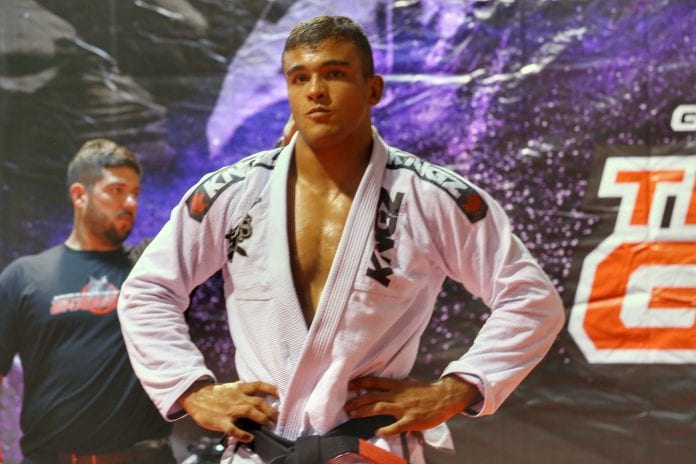 Kaynan Duarte of Atos continued his recent pro-winning streak on November 3, taking the championship at the Spyder Invitational in Korea over fellow finalist Jonatha Alves. A night spotlighting the best of high level guard-pulling, this most recent installation of Spyder also featured an aggressive stand-up superfight between Lucas “Hulk” Barbosa and UFC favorite Fabricio Werdum.

Here’s how the night played out:

Miyao made it to guard first, moving swiftly into lasso and asserting an overt hunt for the omoplata. An attempt to knee slice by Jang left him caught in half guard with Miyao transitioning in and out of worm guards as he looked for the submission. At reset Miyao stayed seated, fully committed to ground gaming and his plata hunt. The pair briefly broke for blood time when a collision split Miayo’s eyelid, and never got their momentum back. No points, no penalties. Victory declared in Miyao’s favor for more dominant performance.

This time it was Alves who moving fast into guard and continuing the previous fight’s theme of looking for the omoplata. Iwasaki based out within Alves’ guard like an industrial building, resisting attack, but found his arm pulled in for an attempted triangle setup. Recovering the arm, Iwasaki pressured down and maintained the top game, stymying Alves’ progress and forcing his focus onto closed guard or lasso guards. With 30 seconds on the clock Alves finally got what he was looking for, snatching the omoplata and applying reverse armbar pressure to secure the tap. Victory by submission for Alves.

Perhaps the most athletic and exciting matchup of the night, the fight opened with Hugo’s guard pulling and a subsequent battle of the grips between two exceptionally strong athletes. Jackson’s wrestling skills were on display as he committed to an offensive top pressure game, working to knee slice but getting pulled into a backtake attempt by Hugo. Jackson escaped the backtake, forcing a turtle position onto Hugo. Hugo’s escape and ensuing scramble ended in Hugo getting full mount. At the buzzer, brown belt Hugo was declared the victor over black belt Jackson.

Duarte immediately made his way to guard, Ferreira answering with pass attempts. The two reset early on, scrambling to put Duarte on the bottom working toward triangle submission. Ferreira knee shot for the pass but was blocked by Duarte’s considerably beefy guard. Triangle threats continued but the buzzer sounded before the position could be completed. Duarte advances by decision.

In a matchup between guard pulling favorites, it was Miyao’s flexibility vs Alves’ strength. Alves pulled into guard first. Double advantage points were awarded during the pair’s first sweep attempt. At reset there was a double guard pull, both moving into one-in-one-out position. Advantage awarded to Miyao for standing up, but Alves soon scored 2 for the sweep. Miyao opened his way out closed guard to hunt for that omoplata again, with Alves fighting down over the top to pass. With time running out, Alves beat black belt Miyao for his second win of the night.

Duarte pulled into guard, isolating Hugo’s left with a viscous hem grip and committing to mostly closed guard before transitioning into modified spider. Duarte kept the leg grip in an effort to move into sweeps while Hugo looked for his pass attempt. Sensing the pass coming Duarte moved into 50-50 guard, looking for ankle locks. Hugo yanked out of the lock but not before taking some damage, pressuring down to pass but leaving himself vulnerable to an incoming sweep. Once on bottom Hugo almost got the triangle but Kaynan pulled out. Duarte tried to get the sweep but ran out of time. Victory by decision to Duarte.

Giant-pawed Werdum immediately went for the collar tie, answered without hesitation by Barbosa. An aggressive standup game with tie-ups and head position battles proceeded to balance the guard pulling of the night’s gi matches. Driving out of bounds twice the two kept the pressure on, both exchanging slaps as the race to the takedown continued. A single penalty for slapping was finally applied to Werdum, though Hulk seemed unphased and even flashed a little smile. Werdum attempted the low single but landed out of bounds. Soon after to Hulk took a penalty for retreating, evening the score. Double leg attempt from Hulk near the end, but the buzzer sounded with no takedown and no submissions. Werdum immediately asked for 5 more minutes for the fight to continue to some sort of definitive conclusion, but Spyder stupidly declined. Match declared a draw.

We got a double guard pull right out the gate with advantage to Alves. Alves worked toward the mermaid sweep, but was squished by the larger Duarte before finishing. Returning to the feet, Duarte pulled guard again and began positioning himself for a sweep attempt, with Alves inverting for defense into crab ride. Duarte swept his opponent handily, stepping in and out of Alves’ guard without making any overt movement to pass. Alves went for the mermaid sweep again successfully this time, evening the score. The pair made it back to standing, Alves attempting a flying triangle but getting swept instead as he landed. 50-50 guard left both hunting for sweeps and passes, but ultimately Duarte came out victorious via points as the clock ran out.

Duarte’s win comes a week after Atos’ sweep of the SJJIF tourney last weekend, executed along with Spyder commentator Keenan Cornelius, which you can read about here.

Highlights from Spyder are forthcoming.