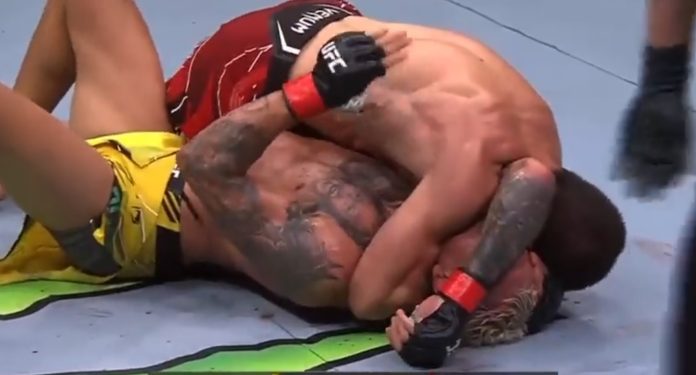 There is a new UFC Lightweight Champion, and his name is Islam Makhachev. And what better way to earn the title than by submitting Charles Oliveira.

Capping off the UFC 280 main event, Makhachev took on #1-contender and former champion Charles Oliveira for the title. Makhachev’s corner included the champion-turned-coach, Khabib Nurmagomedov and

Charles Oliveira was coming into the fight on an 11-fight win streak. Had he not missed weight by half of a pound in his last match, he would have come into this fight as the undisputed champion.

In the first round, the fight was mostly on the ground with Makhachev on top and Oliveira consistently working to retain his guard while Makhachev worked to pass and land shots from top position.

However, it was round 2 that saw the fight’s biggest moments: Makhachev landed a big punch that sent Oliveira straight to the ground on his back. But we’ve seen Oliveira here before on multiple occasions. It’s not uncommon for him to secure an RNC finish just moments after being dropped.

But this time was different. Makhachev pounced on Oliveira and immediately went for head and arm control, improving the position to a head and arm choke. It was only seconds before Oliveira was tapping and Makhachev was crowned as the new Lightweight champion.

ISLAM MAKHACHEV IS THE UNDISPUTED LW CHAMPION OF THE WORLD! 🏆

In the post-fight interview, Khabib encouraged a match-up between Makhachev and 145-pound champion Alex Volkanovski. The crowd erupted as Volkanovski entered the octagon for a face-off with Islam.