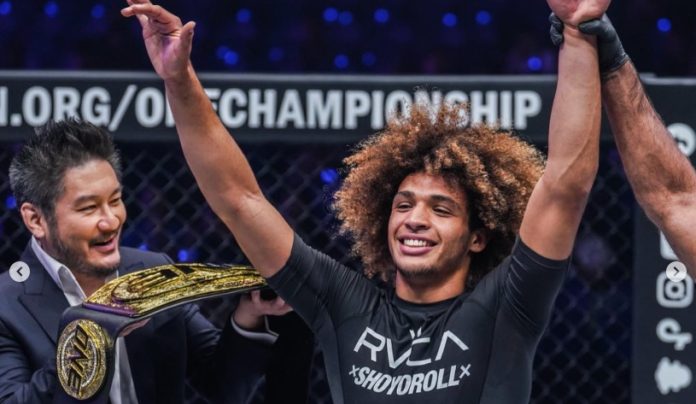 Kade Ruotolo, continuing the spectacular four-submission win streak that earned him ADCC gold, heel-hooked his way to victory over four-time sambo world champion Uali Kurzhev of Russia at ONE on Prime Video 3. This win has earned Kade the ONE Championship lightweight submission grappling belt – along with a $50,000 bonus.

Though Kurzhev reportedly failed a hydration test prior to weigh-ins, making him ineligible for the belt, the Russian still appeared game to put his best foot forward in the catchweight bout that ensued.

During pre-match commentary, ONE CEO Chatri Sityodtong told announcers, “Here’s the thing about sambo: they attack from everywhere. They don’t care about position. A lot of jiu-jitsu guys kind of get into a dance.”

Sambo, according to Sityodtong, would be just the thing to potentially break up that dance. Announcers agreed, reminiscing on the no-holds-barred cage beatdowns of the nineties, and comparing Ruotolo vs Kurzhev to “old school MMA, style versus style.”

Kade – unlike most sport jiu-jitsu players when faced with high-level takedown specialists – met Kurzhev head on in war on the feet, just as promised in a pre-fight interview with the Jiu-Jitsu Times. Though Kurzhev caught Kade with an early foot trip, Kade recovered, wisening up quickly to the Russian’s takedown strategy. Taking advantage of a throw attempt from the Russian, Kade spun around to Kurzhev’s back, where the ADCC champ spent the next several minutes attacking his opponent’s neck.

Kurzhev eventually shook Kade off, to shocked cheers from the crowd – but the Russian’s momentary victory was short-lived. After using a hand-fighting entry to jump guard, Kade wrestled up on a single leg. The ADCC champ quickly transitioned to a bodylock that bought him a second entry to Kurzhev’s back.

Kurzhev’s attempts to recover by rolling through put the Russian on his back – ironically, forcing the sambo specialist to play a brief, defensive guard against the jiu-jitsu phenom’s famous passing power.

Unsurprisingly, that didn’t last long. Merciless, Kade clamped down on a heel hook entry, forcing a tap from Kurzhev at the halfway mark of the ten-minute superfight.

The performance earned Kade Ruotolo a $50,000 bonus, which according to an elated Kade, will go toward the jiu-jitsu gym that he and his brother Tye are currently building in Costa Rica. Kade is already hungry to defend his newly-acquired belt; during his post-fight interview on the canvas, he called out fellow ADCC veteran Tommy Langaker and two-time Mundials champion Tainan Dalpra for potential matchups in the ONE Circle.

“At the ADCC afterparty, [Tommy and I] exchanged some words,” Kade explained to reporters at the post-fight press event. Though it was all done in good fun, the newly-crowned ONE lightweight champion said the banter with Langaker left him feeling “fired up,” and sported a playful grin that promised action, should his fellow ADCC alumnus answer the callout.

According to Kade, he’s also previously trained with Tainan Dalpra, and while they’re not necessarily rivals, Kade believes the Circle would be a great opportunity to release some pent-up tensions from over the years.

So, where does the ONE belt rank in Kade’s growing list of accomplishments? The nineteen-year-old was quick to put his latest title at the top without devaluing his other victories: “Winning this belt for ONE is right there with my ADCC title,” he told the press. “I’m not going to put one over the other.”

Kade also expressed tremendous respect and admiration for Kurzhev. “He caught me clean with that foot sweep at the beginning – I’ve got to give him props for that,” Kade told reporters. However, hitting the canvas early only fired the ADCC champ up. “I’d like to show off my wrestling a bit more,” he added.

Did anything about the sambo stylist catch Kade off guard? “I knew he was going to be fairly strong, and he came at me very hot – and that foot sweep did surprise me,” Kade admitted. “I didn’t think it would hit so clean […] I got right back up to my feet, though, and started pressing forward. I knew that [attack] would probably come again.”

So, Kade did what Kade does: he adjusted.

What about that guard jump we saw mid-match? Guardplay has never been the specialty of the Ruotolos. However, according to Kade, he was never really looking for a true guard jump in the first place. What he really wanted was a flying armbar – but his grip on Kurzhev’s wrist slipped. While the ensuing fall temporarily forced Kade to play from his back, that wrestle-up on the single leg put him right back where he wanted to be.

What’s next for the freshly-crowned ONE grappling champ? According to Kade, he hopes to share a fight card with his brother Tye in December – and if Tye wins a second ONE grappling superfight, Kade’s potentially down for an eventual matchup of Ruotolo versus Ruotolo in the ONE Circle.

“He’s got two wins over me [in previous competition],” Kade said of his twin, grinning. “So I’d love to get one back.” And if that win arrives in a defense of Kade’s new belt, all the better.

Miss all the action from ONE on Prime Video 3? Catch up on Ruotolo vs Kurzhev – along with two other world title bouts – streaming from Amazon Prime.