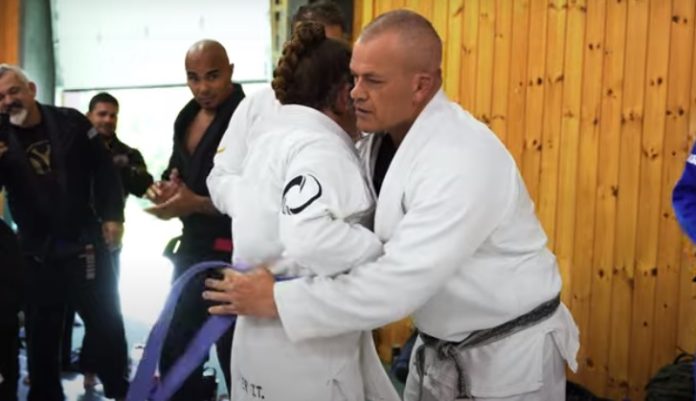 At a small promotion ceremony at the recent 11th annual Origin Immersion Camp, Jocko Willink had the opportunity to promote his own daughter to blue belt.

In front of a crowd of grapplers, Jocko imparts some wisdom, explaining that jiu-jitsu doesn’t work when you’re trying to force your opponent into what you want, rather, you must get them to go where you want on their own. Such is the same in life, Jocko explains: If you tell someone they must do something, then their natural reaction is going to be resistant.

However, Jocko explains that he hasn’t always followed this rule himself, and had his kids in jiu-jitsu 7 days per week at a young age, joking that it was borderline child abuse. However, despite his pressure, one of his daughters, Rana, has continued to pursue the sport on her own while attending college.

When returning home, it was clear that she wasn’t rolling like a white belt anymore. So, Jocko called her coaches from Paragon Jiu-Jitsu and received a unanimous vote to grant her the promotion.
There were tears all around, but Jocko made it clear, “I’m not crying, you’re crying!” as his daughter wiped tears of her own. The video closes with his quote, “I always say, jiu-jitsu is the most important thing you can give to your kids.”