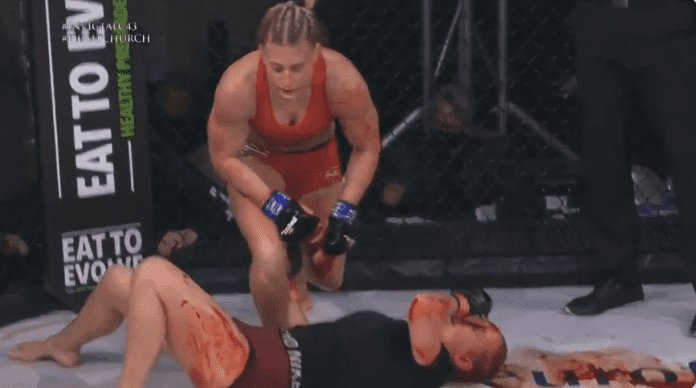 Kayla Harrison’s Invicta debut against Courtney King was a showcase of skill and tenacity, and by the time the referee called the fight, the cage was covered in blood.

King wasted no time in closing the distance between herself and Harrison, and both fighters exchanged a few combos before Harrison attempted a takedown that King defended. Harrison pushed King against the cage and hit her with a few knees as they clinched up. With about three minutes left in the first round, Harrison pulled away, and the two resumed fighting in the center of the cage. Harrison’s next takedown was successful, and she ended up in King’s closed guard. Harrison remained relentless with her strikes and opened up a big cut on King’s face that covered the mat with blood. Harrison moved past King’s closed guard, forcing her to transition to half-guard before moving to mount and then taking King’s back. With under thirty seconds to go, Harrison transitioned to an armbar, but King managed to protect herself by stacking up until the end of the round.

King came forward again as soon as round two began, but Harrison was quick to push her against the cage and take her to the ground, again ending up in King’s closed guard. King worked to control Harrison’s posture while Harrison rained down punches and elbows. After a lack of action, the referee stood the fighters up, and King took a few punches and a hard takedown from Harrison. Harrison moved from King’s closed guard to half-guard to side control and then to mount, pummeling King with punches and elbows from the top position. Harrison moved back to side control and rained down punches, and the referee called the fight with twelve seconds left to go in the second round.

With the win, Harrison’s undefeated professional MMA record improved to 8-0.