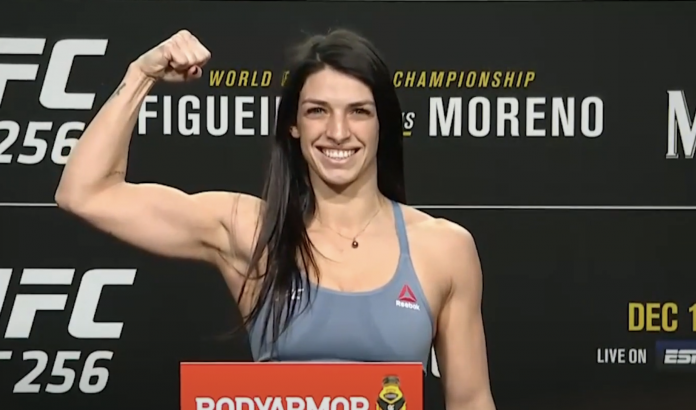 Mackenzie Dern faced off against fellow BJJ black belt Virna Jandiroba at UFC 256 in what ended up being a bloody and brutal fight that went the distance.

Dern came forward aggressively with strikes to back Jandiroba against the cage. Jandiroba landed a few sporadic strikes in retaliation, and Dern countered by again driving Jandiroba against the cage with some fast combos. After the two returned to the center of the octagon, Dern again moved forward with relentless strikes to get Jandiroba’s back against the cage, at which point Dern tried to collect her opponent’s legs for a takedown. Jandiroba, however, managed to stay on her feet and break away from Dern to return to the center of the cage. Jandiroba landed a solid body kick, but Dern was steady in her efforts to push Jandiroba back and control the space in the octagon. A jab-cross combo from Jandiroba landed, and the fighters clinched up for a moment before the round ended.

Dern again drove Jandiroba against the cage at the start of round two, but the latter punched her way out. Jandiroba continued to land more sporadic strikes and quick combos, and Dern fell to the ground just briefly before getting to her feet when she saw Jandiroba wouldn’t engage. Dern pushed Jandiroba against the cage, and Jandiroba reversed the position and landed a big knee followed by a cross to escape. An accidental eye poke from Dern stopped the action while Jandiroba recovered, and when they resumed fighting, they didn’t miss a beat in coming after each other. Jandiroba kicked Dern in the face, but Dern caught the leg and tried for a takedown, driving her opponent against the cage. Jandiroba managed to flip the position and push Dern against the cage, getting her to the ground as blood poured from Dern’s nose into her eye. Still, Dern locked up her closed guard and tried to attack one of Jandiroba’s legs, though she couldn’t get the position she wanted before the bell rang.

Dern was noticeably more cautious in round three, but still went for a single-leg takedown that ended up pushing Jandiroba against the cage. The fighters broke away from each other and returned to the center of the octagon, where Jandiroba landed a kick to Dern’s face. Dern countered with a body kick and soon after landed a big punch to Jandiroba’s head that staggered her enough to open the opportunity to get her against the cage and go for another takedown attempt. Jandiroba got Dern onto her back, and after they disengaged, the referee beckoned Dern back to her feet. The fighters went through a steady back-and-forth of strike and kick exchanges until Dern pushed Jandiroba to the cage. Jandiroba jumped closed guard and opened the opportunity for Dern to get on top and land a few final hits before the round (and the fight) finished).

After the fight concluded, Dern was awarded the unanimous decision, marking her third straight win and improving her professional MMA record to 10-1.