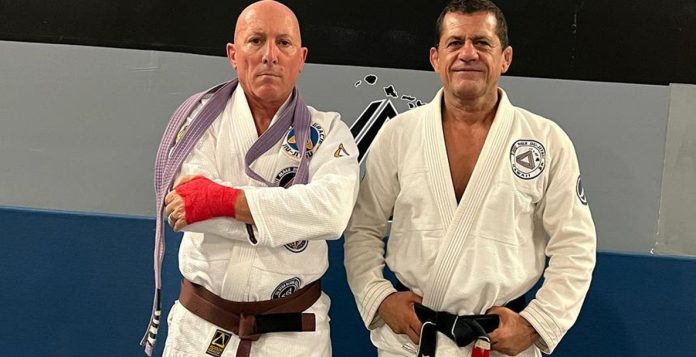 Maynard James Keenan, perhaps better known as the singer and lyricist for Los-Angeles based rock band Tool, earned his brown belt in Brazilian jiu-jitsu, according to an Instagram post made on November 21, 2021, by well-known Rickson Gracie black belt professor Luis “Limão” Herédia, who runs the Hawaii-based Maui Jiu-Jitsu Academy.

Keenan’s promotion to his new rank should come as no surprise to anyone who’s been following the singer’s offstage pursuits for any length of time. According to a 2015 article from ABC News Radio Online, Keenan has been training in jiu-jitsu since the 1990s, and was awarded both his blue and purple belts by Herédia. The article includes a screenshot of an Instagram post by Keenan from a now-defunct account, in which Keenan details the trials and tribulations of his unique jiu-jitsu journey, describing his 2015 promotion to purple belt as a “curveball” after a series of injuries and lack of reliable access to a Rickson Gracie curriculum during his travels made Keenan’s training inconsistent. The singer goes on to offer heartfelt thanks to various mentors in the Brazilian jiu-jitsu community, including Todd Fox, Rodrigo Vaghi, Henry Akins, and of course, Herédia himself.

It’s not the first time Keenan has opened up about his combative hobby either. All the way back in 2006, The AV Club’s Aaron Burgess probed the then-42-year-old Keenan’s experiences training in martial arts under the legendary Rickson Gracie. Over the course of the interview with Burgess, Keenan characterizes his jiu-jitsu training under Gracie’s tutelage as “humbling,” claiming that “I have some skills that I can use, but I’m just a small guy.”  Keenan goes on to describe his personal challenges on the mat, as a 150-pounder occasionally matched up against aggressive training partners who might outweigh the singer by forty pounds or more. The singer tells The AV Club, “When it comes to males and their testosterone levels, and what happens in a situation where those testosterone levels are elevated, there’s no amount of reasoning and discipline in the world that can take a middle-skilled or lower-skilled guy and make him realize that it’s not okay to hurt somebody… when it gets to a certain point, it’s just pit bulls fighting.” When The AV Club asks Keenan if the latter has ever taught these aggressive-minded bigger men “a lesson,” Keenan laughs, demurring, “Well, I mean, if I can—if I’m fast enough, yeah. And that’s the beauty of jiu-jitsu: If I am fast enough and I am skilled enough, yes, I can teach him a lesson. Generally? No.”

Fifteen years later, that humble 150-pounder fending off comparative giants – now 57 years old – has come a long way. Herédia’s Instagram post announcing Keenan’s promotion is captioned “True warrior there.” Comments on the post – which has already garnered over 2000 likes – are filled with excited congratulations from the broader Brazilian jiu-jitsu community. Pedro Sauer black belt David Porter, for example, remarks, “Happy to see he’s progressing, and happy to see him make it this far. Hope he gets his black belt too someday,” to which Herédia proudly replies “Black belt is coming on his way soon.”