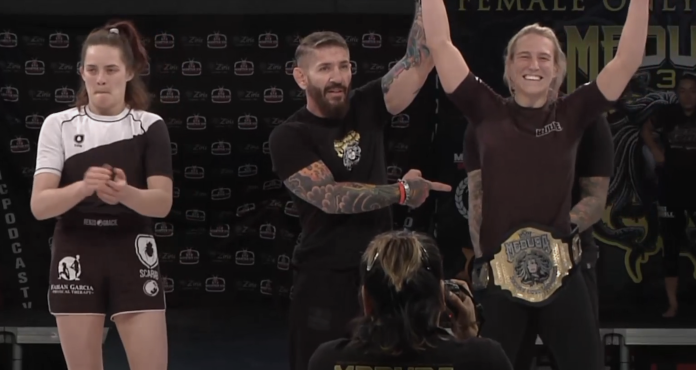 A successful pharmacist by day and competitive jiu-jitsu athlete by night, Claire North has never done anything halfway. “I’ve always been pretty intense with everything that I do,” she tells me. “So, I think that for me, honestly, jiu-jitsu kind of saved my brain when I was in the process of getting my doctorate. Having some kind of physical release is really important after sitting all day, where you’re just a brain, studying all these things.”

“If I screwed up a test, and I didn’t know an answer, the end result of that could be that I killed someone,” North explains bluntly. She laughs, adding, “Versus going to jiu-jitsu, where I’m just trying to kill other people, and just being exclusively a body! It’s so nice to just have that counterbalance.”

North still remembers a particular feeling coming over her, a couple months into her early jiu-jitsu training, when she noticed the vibe of the others in the training room. “When I was hanging around after class, and everyone was just talking, the people who would do that were the people who were obsessed. How they talked about it – the intensity and the voracity with which they spoke about this thing – it was like crack. I want to be around people who can’t get enough of things.

“I think that so many people tend to kind of just settle into being grey, because it’s easy and it’s safe. But the people who just can’t get enough of it – I love the sport, and I love the intensity of the people doing the sport who train as hard as they can, and I just knew I wanted to be in that group.”

That dedication to her jiu-jitsu paid dividends on Saturday, October 22, when North – still fresh off a silver medal performance at no-gi Pans – submitted her way through the entire bantamweight division at EBI’s elite all-female Medusa 3 tournament. North’s wins from the weekend include a choi bar submission over four-time no-gi Pans champion Sophia Cassella, and a kimura lock finish on 2021 ADCC European Trials champion Peyton Letcher in the finals.

All in all, when you add up the numbers, North spent perhaps five minutes in total on the mat over the weekend – quite a feat in a submission-only show.

“Sometimes you feel like you try, and try, and try, when you’re in the training room, and a technique never works,” North reflects. “I think one of the DDS guys back in the day said something along the lines of, ‘If you’re not getting tapped regularly at your gym, you need to get a new gym.’” She chuckles. “Well, holy cow, I am apparently at the right gym, because nothing I do ever works!”

Which was why one of her proudest moments from Medusa 3 actually took place during her first match, against Leticia Yuka. “We’ve been drilling this move called the Z-Lock,” says North. “I’ve drilled it for probably six hours this week – just this move, setting up the Z-Lock, finishing the Z-lock – and to be able to hit that move in my first round, and finish it in under a minute, you’ve just got to be proud.”

“It’s cool to be able to honor your training partners, in a way, and honor your gym,” she continues. “Just to show that what they’ve taught works!”

North, 29, began training at the age of 19 as a member of the Brazilian jiu-jitsu club at the University of Iowa. “It was just something that fit into my schedule,” says North, “but I was always very, very competitive, growing up. I didn’t really have any sport outlets that sort of fit my nature – I tried, but girls were definitely not encouraged to do wrestling, so as soon as I found [jiu-jitsu], I was all in.”

What’s remarkable about North is that — aside from defeating world-class athletes on high-profile grappling shows — she’s currently a normal 9-to-5 white collar professional. Her day job as a pharmacist is what parents of a particular generation fondly call “a real grown-up job” – and quite a demanding one, at that. Yet, North also regularly competes – very successfully – against full-time athletes.

What actually bothered her, earlier on in her career, was the pedigree on some of the other girls in her brackets. “I felt like because we were from small town Iowa – we would fly out to Worlds, and we would hear the Alliance chants, and all of these people would know each other, and all the heads of these gyms were multiple-time champions – and I’d think, ‘Oh my gosh, who am I, this little girl from a middle-of-nowhere cornfield, from this team that no one’s heard of?’ So there was definitely this feeling of, ‘Who do I think I am, going up against people who have, say, Fábio Gurgel in their corner?’

“And then I just realized that [feeling that way] was stupid – because first off, especially now, the content is there. The instructions are there. As long as you have a good coach and you have a good environment, you just have to be willing to put the work in – to put yourself out there in competitions, to have the confidence to believe in yourself enough to implement the moves you’ve learned – and be willing to put in the mat time.”

So, what’s North’s secret to success, in a field of full-time professional competitors from those big-name, powerhouse gyms? Mostly, her own time management skills and strongly disciplined intentions. She works at the hospital during the day, and attends class at the jiu-jitsu gym – which her husband owns and runs – between five to seven days a week.

“People have varying levels of intentionality with their training, and because I always knew that I didn’t have the same amount of time as these full-time athletes, I had to be very, very intentional with my training,” explains North. “And as much as I can, I always try to set a goal for class, whether it’s hitting a move, or getting a certain number of rolls in. And obviously, those goals evolve and change over time, but for me, having a very specific intention with every class that I go to – and being able to soak it all in as much as possible – is crucial, because I don’t have time for two-a-days.”

What’s next on the jiu-jitsu agenda for North? Though she’ll technically be old enough to qualify for a masters’ division in the next year, she’s determined to continue competing in the adult divisions for as long as she can. “I’m going to do no-gi Worlds in December,” she confirms. “And in two years, I want to do the ADCC Trials.”

With a potential ADCC run on the line, North is determined to whip certain elements of her game into shape. “I do absolutely need to add takedowns [to my game],” she admits. “I don’t need to become an Iowa wrestler” – here, she laughs again – “but there’s a baseline proficiency someone needs to have [in wrestling] for ADCC, and I do not hit that yet, so I definitely need to get to that baseline standup proficiency to not look like a dud – and to avoid just getting outpointed.” Stand-up skills aside, however, North is confident in her ability to hone what she’s already good at in her own game – and get it up to Abu Dhabi standard in time for Trials.

Ultimately, North hopes to see women’s jiu-jitsu continue to grow. “I really hope that we keep getting opportunities – but I also hope that [other women] follow Ffion [Davies] and Brianna [Ste-Marie]’s model of ‘Guys, we’ve got to make [jiu-jitsu] exciting.’ I really hope that as a sport, we all recognize the entertainment value that is going to lead to opportunities – that’s something that’s in our hands, as women. We have the ability to make this sport as exciting as we can.”

However, she also encourages combat sports news outlets to step up their coverage for female athletes. “There are so many girls who, if you gave them a microphone, you could really make [women’s jiu-jitsu] something people want to watch. If places like FloGrappling do more features on someone like, say, Bia Basilio, people are going to want to watch her matches.

“Giving women the opportunity to be exciting, both from a promotional standpoint, and just from a competitive standpoint in general, plus women taking that opportunity, and making themselves exciting – I think those are the two things that need to happen in the sport.”

And North herself, it seems, is one of the athletes paving the way.

Any final words of advice for other grapplers who hope to follow North’s example on the competitive circuit? “It is important to celebrate any and all accomplishments, not just gold medals,” she emphasizes. “If you get down on every loss, you will burn yourself out before you get to the wins. High standards are important, but giving yourself the grace to grow and learn is way more beneficial in the long run.”

If you missed her historic Medusa 3 run, you can still stream the event on UFC Fight Pass.

Special thanks to Beatrice Jin of The Grappler’s Watch for insights on developing this story. For more content and analysis on standout athletes in women’s jiu-jitsu, subscribe to Beatrice’s substack.