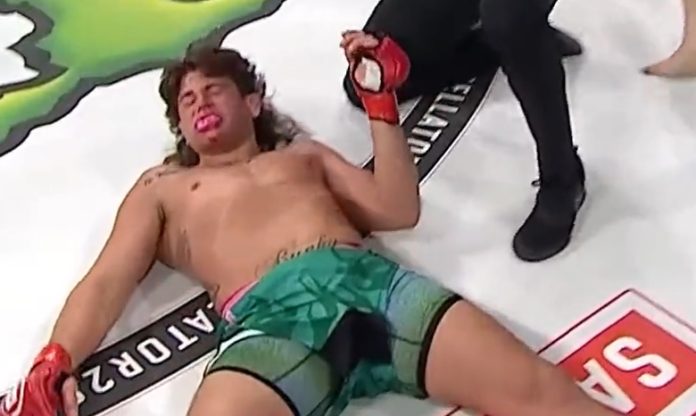 Pat Downey, well-known as Bellator’s wrestling whiz, ate a massive round one knockout from Christian Echols in Echols’ debut at Bellator 289. According to reporting by Matthew Wells of MMA Junkie, Downey – who was a D1 All-American wrestler at Iowa State and 2019 US Open champion – entered the fight as a -2500 favorite in some sports books.

While Downey’s grappling chops earned him the upper hand over Echols early in round one, thanks to a quick, aggressive submission attempt from a front headlock position, Echols fought his way out. That escape would ultimately prove itself to be Downey’s downfall. It bought Echols the scant time he needed to recover his wits, whereupon he began landing heavy blows against the wrestler, eventually scoring a clean knockout less than three minutes into that first round.

In an interview with MMA Junkie, the victorious Echols remarked, “I was 2-2, so everybody looked at me as a scrub. What they didn’t understand was, when I changed my life around and I stopped doing the stupid things I was doing, and I found God. I started training six hours per day. I’m training all the time. My last two fights, I had a total of 55 seconds in total through both fights. Nobody sees that. They look at 2-2 and say, ‘Oh, we’ll get this scrub in here. He’ll fight Pat Downey. Pat Downey will whoop his butt, [and we’ll] go on with the day.’

“That’s not the case, and I’m here to show everybody: I’m not to be played with. Screw the Internet. Screw Joe down the road that put me at a 15-1 underdog. I can do this, and I know I can. I’ve just got heart.”