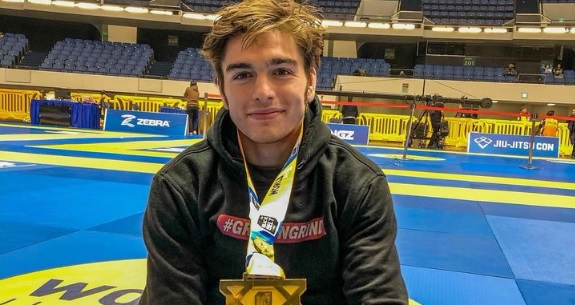 The IBJJF No-Gi World Championships showcased standout performances from some of jiu-jitsu’s greatest competitors, who flocked to Anaheim, California from December 8 through December 11 to duke it out for one of submission grappling’s biggest titles.

Which isn’t to say that Amy Campo exactly walked away empty-handed either. The ADCC champion took home gold in her own division, and gave Clay a grueling war in the finals of the absolute.

Clay opened their match by immediately sitting guard, negating any takedown attempts from the bigger athlete, and looked to reap for a leg lock. Campo’s defense allowed Clay an opportunity to sweep. As Campo based out to avoid the sweep, a grimly relentless Clay hopped on to Campo’s back.

The ADCC champ, however, wouldn’t give up four points that easily. Despite a strong effort from Clay to sink in her second hook, Campo successfully rotated out of the position, putting Clay on her back, and Campo in her guard. Clay locked up a high closed guard, and began hunting for submission entries from the bottom.

Campo stacked her way out of a tight armbar attempt from Clay, and fired back with an aggressive knee cut pass. Clay narrowly recovered, returning to a seated guard. Campo, still relentlessly hunting for a pass, cartwheeled over in an attempt to attack Clay’s back. Clay once again recovered, returning to her seated position. Despite several more powerful passing sequences from Campo, Clay ultimately continued to retain her guard – along with her two-point lead, clinching the women’s absolute title.

Meanwhile, Brianna Ste-Marie, who recently broke Mayssa Bastos’ undefeated streak at WNO in the promotion’s first ever female headliner, likely surprised no one by taking the IBJJF no-gi lightweight world title in her black belt debut year. Not only did Ste-Marie finish 2022 No-Gi Worlds at the top of the podium, she also pulled off three submissions against three opponents, with zero points scored against her.

The Canadian star has previously spoken out on her hopes that her increasingly dominant performances on the world stage will help turn the tide of a troubled grappling scene back home in her native Quebec, where jiu-jitsu tournaments remain illegal. With luck, this latest feather in her cap may put her in a stronger position to continue fighting the good fight.

While the black belt adult divisions are typically dominated by full-time professional athletes, don’t be too quick to dismiss the desk jockeys. Tammi Musumeci, older sister to current ONE flyweight submission grappling champion Mikey Musumeci, swooped back into Worlds to claim her fourth no-gi world title – not bad for a lady who currently works a day job as a high-powered lawyer rather than walking the path of a full-time grappler.

Though not yet a black belt, Dream Art star Giovanna Jara also turned heads by reprising a seemingly effortless double gold performance at brown belt, echoing her earlier double gold victory at No-Gi Pans a few months ago. Given recent IBJJF rule changes regarding minimum belt rank periods for color belt adult world champions, we might not see Jara competing in the brown belt division for much longer.

Meanwhile, the men’s divisions also saw some eye-opening displays. In particular, previous world champion Gianni Grippo made a truly remarkable comeback. Grippo, who suffered a major injury earlier this past competition year, put a clinic on his division with several of his trademark back attacks. It’s a redemptive performance that’s earned him the third no-gi world title of his black belt career, and may indicate a new era of dominance from a freshly-recovered Grippo on the competitive scene.

Dante Leon, fresh off a bronze medal finish at ADCC, moved weight classes to claim his second no-gi world title, this time at lightweight. The returning champion looked to be in fine form, with solid performances over some very game opponents in a new division.

Additional standout men’s performances included eternal Daisy Fresh favorite, Jacob Couch, fondly known as the Hillbilly Hammer, who took his final victory lap as a brown belt by cleaning out his division for the second time since Pans, before earning his black belt promotion on the podium.

Also competing in the brown belt division, Brazilian Fight Factory’s Andrew Tackett – one of the famous Tackett brothers – put on a monstrous show in his journey to the podium. The younger Tackett brother took out some true standouts in his division, including ADCC 2022 alumnus Kenta Iwamoto, who went the distance with Tackett in a war that came down to a razor-thin battle of advantages in the semis.

Andrew then advanced to the finals, where he won with a quick kimura submission. The performance ultimately earned Andrew a decisively-won gold medal finish as the middleweight world champion.