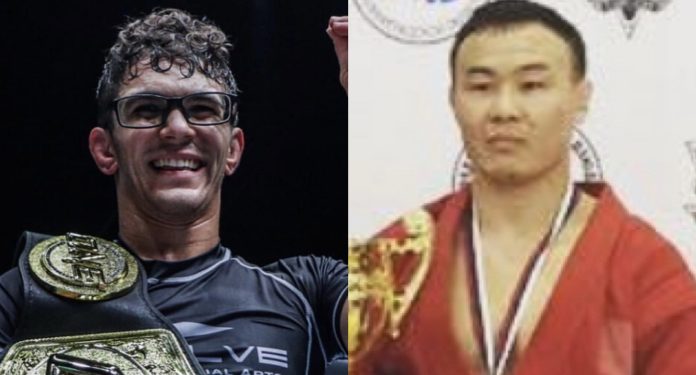 ONE Championship continues to stoke the flames of rivalry between the jiu-jitsu and sambo communities – this time by matching ONE flyweight world champion and multiple-time Brazilian jiu-jitsu black belt world champion Mikey “Darth Rigatoni” Musumeci against sambo world champion Sayan Khertek. Darth Rigatoni is set to defend his belt on Friday, January 13, at ONE on Prime Video 6. The event will stream live from Impact Arena in Bangkok, Thailand.

It’s not the first time that ONE has pitted world champions from jiu-jitsu and sambo against each other in its unique submission-only grappling ruleset. Fellow ONE submission grappling champion and ADCC champ Kade Ruotolo initially heel-hooked his way to the lightweight belt in a scrap against four-time sambo world champion Uali Kurzhev. His twin brother Tye Ruotolo, more recently, made short work of Dagestani combat sambo medalist turned MMA star Marat Gafurov via a slick wrist lock off a triangle choke attempt at ONE on Prime Video 5.

And then there’s Silver Fox jiu-jitsu sensation Danielle Kelly, who locked up a rear naked choke on Russian sambo phenom Mariia Molchanova back in November, securing a victory in less than three minutes. Even as early as September, we saw jiu-jitsu black belt Rodrigo Marello set a new record for fastest submission in the ONE Circle when he ankle locked Russian sambo champion Ruslan Bagdasarian in just fifteen seconds.

So far, jiu-jitsu representatives have emerged victorious in every one of these bouts – though of course, in combat sports, nothing is truly guaranteed. According to our interview with ONE Championship CEO Chatri Sityodtong this past October, these sambo versus jiu-jitsu matchups are his way of encouraging a rivalry between two exciting, highly submission-oriented grappling arts.

“After thirty years of combat sports rising in popularity around the world, out of the grappling arts – the finishing grappling arts – jiu-jitsu and sambo are the best,” Chatri told us this fall. “We know that. I think the others are inferior. So, we’re creating that rivalry all around the world, between sambo practitioners in Russia and Eastern Europe, versus jiu-jitsu practitioners in the US and Brazil and Asia.”

For his part, Darth Rigatoni seems pleased to engage in the rivalry, having previously called out any sambo world champions brave enough to take him on. At ONE on Prime Video 6, he’ll finally get his wish.

Tune into all the action on Friday, January 13 by streaming the full show at 8 PM EST from Amazon Prime Video.