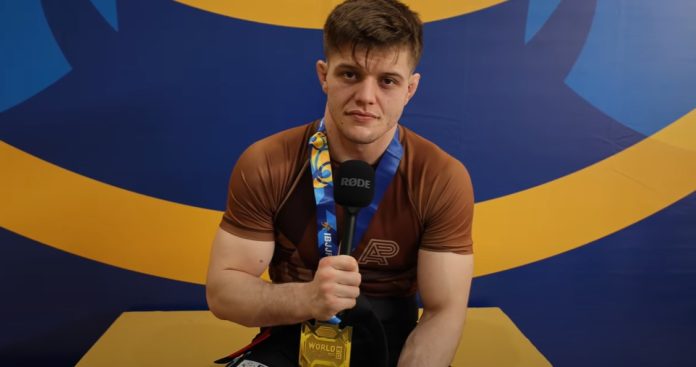 Jacob “Hillbilly Hammer” Couch – adding to an already highly successful and action packed competition year – capped 2022 off with a gold medal victory in the brown belt heavyweight division of No-Gi Worlds over the weekend. Hillbilly Hammer delivered a dominant performance that rivaled his double gold win at No-Gi Pans earlier this year – and he was suitably rewarded.

After Couch was crowned no-gi world champion, Heath Pedigo, the mastermind behind Pedigo Submission Fighting – better known in some circles as “Daisy Fresh,” after the laundromat the famously scrappy team once trained out of – officially promoted Couch to black belt on the podium.

The promotion, fittingly, will mark 2023 as Couch’s black belt debut. Given that Couch has already proven himself a legitimate danger to far more experienced black belts, it’ll no doubt be a year to watch for the Hillbilly Hammer’s meteorically growing career.