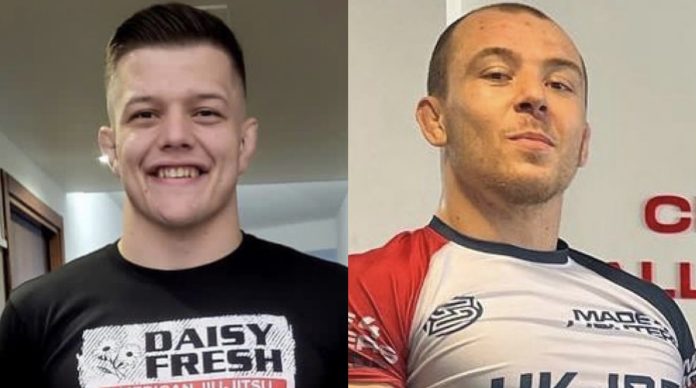 Jacob “Hillbilly Hammer” Couch will be taking on ADCC 2022 veteran and leg lock wizard Eoghan O’Flanagan in an explosive clash between elite grapplers at GrappleFest 14 on Saturday, December 3 in Liverpool.

Couch and O’Flanagan have a lot of respect for each other as opponents – particularly given their respective reputations as fearsome heel hookers with the ability to impose shootouts. “Lord willing, all the shots are coming from my end onto Eoghan’s territory, but he’s dangerous from everywhere, so I’ll do my best to come prepared for any and everything,” the Hillbilly Hammer tells the Jiu-Jitsu Times.

O’Flanagan, for his part, also anticipates a leg lock shootout in fifty-fifty. “I imagine there will be some fifty-fifty as ever, or some variation of legs,” he tells us, though both he and Couch are playing their cards close to the chest in terms of game plan.

O’Flanagan’s mat time competing in arguably one of the most talent-stacked ADCC rosters in Abu Dhabi history has also armored him with some confidence-boosting experience. “Lessons from ADCC and the Trials, for me, are just confidence building, to be honest – which I had always lacked prior to actually doing well in any competitions,” O’Flanagan elaborates. “The more experience I get against top guys, win or lose, the better I feel about my BJJ.”

O’Flanagan, as we know from his match against Mason Fowler in the ADCC 2022 quarterfinals, can also be a bit of a jokester. When a visibly frustrated Fowler ate a penalty for delivering a light leg kick against O’Flanagan’s open guard, O’Flanagan grinned and clutched his leg, dramatically feigning injury in a performance worthy of the World Cup.

“I don’t think there was any ill intent, to be honest,” says O’Flanagan of the incident. “I think it’s just annoying, someone sweeping your leg and you hitting your ankles together. I was pretty surprised [Mason] got a penalty, given it wasn’t really intended to do any damage, but I guess they wanted to be consistent with the rules.”

Couch, though not an ADCC 2022 veteran himself, has previously expressed a determination to prove himself worthy of any of Abu Dhabi’s fiercest contenders. However, he has no chip on his shoulder when it comes to facing O’Flanagan – simply a desire to deliver a powerful performance against a formidable opponent. “I’m more focused on showing the utmost respect to Eoghan for his incredible jiu-jitsu, not necessarily his accolades,” explains the ever-humble Couch.

Both men are thrilled to have the opportunity to participate in GrappleFest, one of the largest stages in the UK for elite submission grappling. “The environment is bar none,” says the Hillbilly Hammer, now a multiple-time GrappleFest veteran. “Competing is competing, whatever mat you may step on, but the energy in that place when those lights come on and that music starts playing is something I recommend everyone try to be a part of.”

“I’ll definitely be back on the GrappleFest stage,” promises O’Flanagan. “As long as the [money] keeps coming, I’ll keep rearing my big bald head. For me, the Grapplefest atmosphere is great. Everyone’s watching from close range, and it reminds me a lot of rolling in the gym with everyone watching you do your thing.”

Check out the entire main card below:

Don’t miss your opportunity to be a part of the audience for this must-see showdown. Stream the whole card live on Saturday, December 3, at 11 AM EST, via the FiteTV PPV.