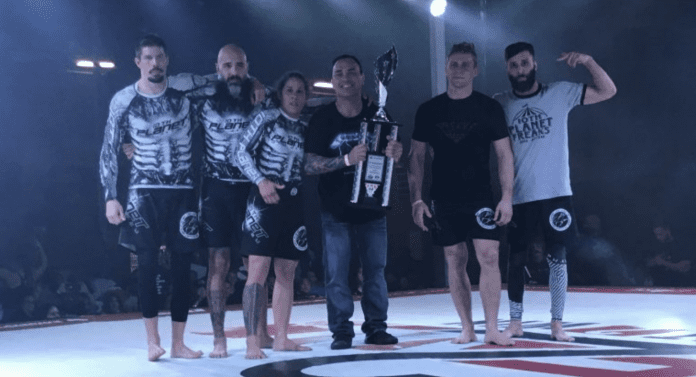 December 4 marks Subversiv’s combat jiu-jitsu team showdown between some of the jiu-jitsu world’s most talented grapplers – including several ADCC 2022 alumni, such as Giovanna Jara  – and MMA professionals straight from the rosters of the UFC. Like many high-profile combat jiu-jitsu events, this upcoming Subversiv show represents an opportunity for the best of both BJJ and MMA worlds to collide in a ruleset that allows athletes from both disciplines to showcase their skills.

“The way we designed this event was to do four MMA teams versus four jiu-jitsu teams, all under combat jiu-jitsu rules – so it’s a bit of a meet-in-the-middle as far as doing MMA versus jiu-jitsu,” says Suversiv’s director of talent Kendall Reusing – herself an ADCC 2022 veteran and highly-decorated grappler in her own right. “So we found some of the biggest MMA and jiu-jitsu stars from around the world, and we got them on some teams and combined them with some of our local athletes.”

The idea is to see which discipline – MMA or jiu-jitsu – will prevail under the combat jiu-jitsu ruleset, which still focuses primarily on submission grappling, but allows open-handed striking.

“As far as my predictions go, I would say that I expect jiu-jitsu guys to do well, if they can get into strong guard positions, or in taking the back – positions where they’re going to be able to use jiu-jitsu more singularly, rather than staying in ranges with MMA fighters where MMA fighters feel comfortable,” says Reusing. “That would be stuff like knee shield positions, side control, mount – I think as long as jiu-jitsu people can keep it in positions where they have the upper hand, then they will come out on top.”

Reusing isn’t counting out the MMA fighters, though. “If MMA guys – who obviously do jiu-jitsu as part of their sport – are able to gear their positions to be more MMA-dominant, then that’s where they will prevail,” she predicts.

Reusing is particularly keen on seeing how some of the notably scrappy jiu-jitsu girls – particularly those with ADCC experience – handle the challenge. “I’m really interested to see how Giovanna Jara does in this ruleset because I think she’s a very physical, great no-gi fighter, who can do some real damage against some of the MMA girls.

“I also think, on the same note, that Amanda Leve is someone whom I’m very interested in watching, because she’s extremely proficient in jiu-jitsu and MMA, being really successful in her MMA scene, and obviously an ADCC veteran. So I’d love to see those two ladies go together, but even if they don’t go together, I’d just love to see them on the card in general – I think they’re going to be some of the most exciting fighters that we see.”

What are the keys to victory for a jiu-jitsu player who doesn’t necessarily boast the MMA experience of someone like Amanda Leve? “I think a traditional jiu-jitsu athlete is going to need to get to very strong, dominant jiu-jitsu positions, and not stay in that mid-range on the ground where striking is really dangerous,” says Reusing. “So that would be in a closed guard and on the back – obviously passing as well, so if they can get the takedown and be on top, then that’s going to be really, really strong for them because we know that a lot of these MMA people are going to want to be on top, so they can use their striking and rain down on their partners from the position. So if they can get there, they’re going to be very difficult to deal with.

Reusing has high hopes for combat jiu-jitsu as an emerging discipline in submission grappling. “I definitely think combat jiu-jitsu is going to get bigger and bigger because it’s really fan friendly, and it’s very exciting, and it pulls people from multiple disciplines together – which means it pulls their fan bases together, which makes a bigger fan base for CJJ as a whole,” she explains.

“Subversiv is definitely on the forefront of that,” Reusing continues. “We’re looking to put together not only events that are fun for our fighters, but events that are really fun for our fans, and really bring the communities together in a way that’s good for the whole family – so people can come and bring their wives, their girlfriends, their boyfriends, their brothers, their sisters – and be excited and entertained by the event, rather than only being entertained if they’re jiu-jitsu fans, which is what we find in most jiu-jitsu events right now.”

According to Reusing, part of Subversiv’s quest to make jiu-jitsu more spectator friendly involves adding other forms of entertainment in the shows. “We’re also looking to incorporate other forms of media, such as music and other kinds of performances, to bring more fans to jiu-jitsu,” she explains. “We’re going to use combat jiu-jitsu as a vehicle to do that, and look to set up very, very high level super matches, super fights, and more brackets like this, with the best talent, to do so.”

Check out the full card below:

Don’t miss all the action! Subversiv Miami streams live from Fite TV on PPV, this Sunday, December 4, at 3 PM EST.