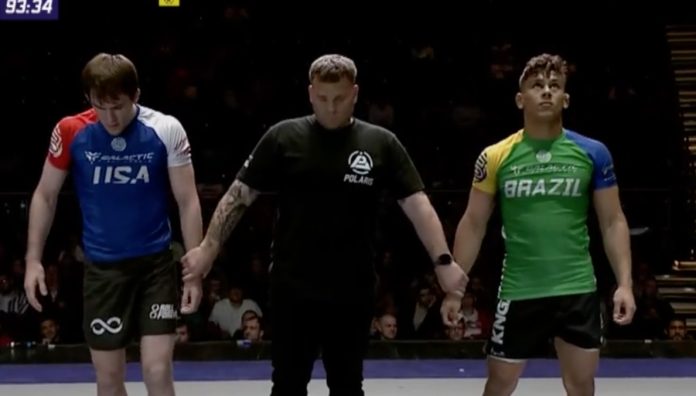 Polaris 20: USA vs. Brazil showed us another exciting Squads event from the UK-based promotion, with grappling stars from both countries going head to head to see which team would reign supreme.

Round 1 saw plenty of draws, as is typical for a Polaris Squads event — submissions are crucial to gaining team points — but Team USA pulled ahead during a match between Mason Fowler and Kywan Gracie. A flying armbar attempt from Gracie seemed like it would spell out an early end for Fowler, but he was quickly able to escape the submission attempt and pass Gracie’s guard to north-south. Gracie then attempted an Ezekiel choke from the bottom position, and though Fowler initially struggled to escape, the tables turned once he pulled himself free. Fowler quickly transitioned to an armbar, then went belly-down to get the first submission of the event and the first point on the board.

Team USA’s lead didn’t last, and in round 2, Team Brazil pulled ahead with the help of some strategic matchups — their most advantageous of which was the pairing of Mica Galvao against Team USA’s Keith Krikorian.

The second match between Galvao and Krikorian started with both athletes sitting guard and working leg entanglements. While the opponents mostly focused on attacking each other’s legs throughout the match, Galvao eventually worked his way to the top position, passing Krikorian’s guard and transitioning to mount. From there, a quick transition to an armbar ended the match and tied the team score.

Krikorian and Galvao had another rematch in the penultimate bout of the event. The match started, again, with both athletes sitting guard, though Galvao was quickly able to pass to side control and then transition to mount. Galvao adjusted himself to lock on a mounted triangle with two and a half minutes still left on the clock. Krikorian did his best to defend, but there wasn’t much he could do, and Galvao got the submission Team Brazil needed to pull ahead 2-1 and win the event.

Polaris 20’s big superfight took place between rounds one and two, with former UFC greats Demian Maia and Benson Henderson taking to the mats to show off their grappling skills. Unsurprisingly, Henderson moved with quick action, darting around Maia and searching for takedown opportunities. Maia took the journey down into his own hands though and pulled closed guard, locking up a body triangle to secure the position. Maia began to open Henderson’s elbow, and Henderson avoided danger by freeing his arm. Maia tried repeatedly to hip-bump his way to a better position, but for quite some time, neither athlete was able to advance from the closed guard. Eventually, the referee reset them from standing.

Henderson went in for a takedown, and Maia responded with a sprawl that transformed into a back take, quickly transitioning to a body triangle. Maia was vicious with his neck cranks, but Henderson stubbornly and successfully defended for nearly ten minutes before Maia let him out and worked from the top. Maia paired another sprawl with a guillotine, but Henderson defended again and successfully scrambled his way to the top position, briefly going for a choke of his own. With under a minute to go, Henderson charged forward with fast, agile attacks, attempting takedowns and even a flying triangle, though none succeeded in finishing off the formidable Maia before the bell.

Maia was declared the winner by unanimous decision.