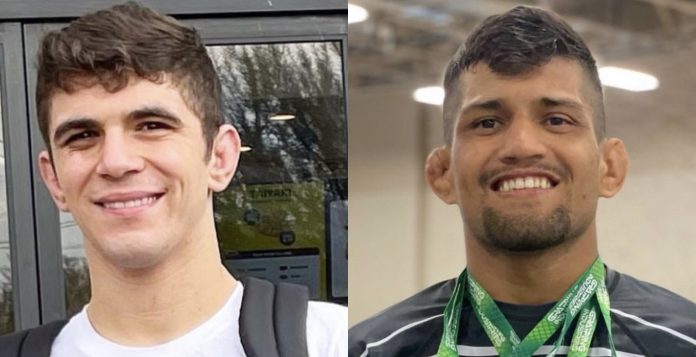 ONE Championship will be streaming its second live event on Amazon Prime this Friday night, September 30.

For those of you who love to see good grappling in action – whether in a submission-only super fight, or in an MMA banger featuring high-level jiu-jitsu players – here are three highly-anticipated matchups to whet your appetite:

In an undercard stacked with up-and-comers, Takahashi versus Oh stands out as an MMA showdown that could truly put one of Korea’s budding submission artists on the fight game map. Oh Ho Taek, currently riding a six-fight win streak, steps up to face one of his most experienced opponents in Japan’s Ryogo Takahashi, a “Shooto” veteran with a decade of cage fighting under his belt, who’s looking to recoup two recent losses in the ONE Circle.

While he’s a fresh ONE Championship debutant, currently untested by the Circle, Oh has turned heads on Asia’s MMA scene with slick jiu-jitsu finishing power, defeating five out of eight opponents by submission – four of which he caught in the first round. A victory over Takahashi – who’s a top-five featherweight ranked just behind Garry Tonon – might propel Oh up through the pecking order.

In our co-main event, fan favorite jiu-jitsu superstar and pizza connoisseur Mikey Musumeci goes to war against longtime rival Cleber Sousa in a trilogy conclusion that marks ONE Championship’s first-ever title fight in pure submission grappling. Not only are Musumeci and Sousa currently 1-1 in previous match-ups – it’s also been half a decade since their last showdown, giving both athletes plenty of time to grow and evolve.

When the Jiu-Jitsu Times last chatted with Mikey about the upcoming match a couple weeks ago, he described their trilogy conclusion as a “clean slate” and “brand new start” for both grapplers. The Circle is their oyster, and regardless of who walks away with ONE’s inaugural world title in grappling, this pair will be making history as the first to fight for a whole new ONE Championship belt.

Speaking of longtime rivals, atomweight queen Angela Lee has looked unstoppable for quite some time now – at nineteen, she became the youngest fighter ever to claim a world title in MMA and one of ONE’s top-three highest-paid athletes on the roster. In her thirteen-fight career, Lee has only ever suffered two defeats: one, to jiu-jitsu legend Michelle Nicolini in a tough decision loss, and the other to ONE’s first ever strawweight women’s world champion, Xiong Jing Nan.

Like Musumeci and Sousa, Lee and Xiong are currently 1-1 in previous showdowns, with Xiong taking their first fight with a fifth-round TKO, and Lee earning her vengeance in their rematch with a fifth-round rear-naked choke. Scraps between these two are historically grueling, explosive affairs, with both women showing off incredible stamina and a determination to go for the finish. In this trilogy conclusion, Lee hopes to become champ-champ by dethroning Xiong as the reigning strawweight queen – though Xiong certainly isn’t about to relinquish her hard-won belt without an absolute war. Knowing this pair, anything could happen inside that cage.