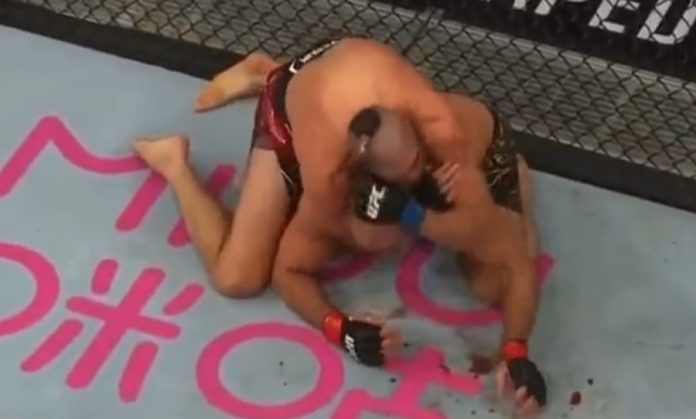 Jiri Prochazka and Glover Teixeira put on a show in the main event of UFC 275 in Singapore, with Prochazka pulling off an RNC finish with just :28 seconds left in the 5th round.

The fight was back-and-forth for the entire 25-minutes. Both fighters were nearly finished multiple times, and Prochazka looked to be on his way out just moments before he pulled off the submission.

As expected, it seemed that Prochazka was winning the battles on the feet, but once the fight was on the ground, it was Glover’s world. Prochazka’s movement and striking was much faster than Teixeira’s, but Glover was able to get into dominant positions on top and land some effective ground and pound, leading to a nasty cut above Prochazka’s left eye at the end of round 2.

By round 4, both fighters were bleeding heavily and Prochazka was landing heavy combos. However, as the gas tank started to run out, Teixeira began to pull away and in round 5, Glover opened the round by wobbling Prochazka multiple times. Perhaps to his own demise, Teixeira kept returning to his grappling. Glover was in full mount when Jiri escaped and a scramble ensured, with Prochazka snatching up an RNC grip on Glover’s neck and forcing the tap without any hooks in, with just :28 seconds to go in the fight.

Glover was up on the scorecards and seemed to be all set to win that final round, so it truly came down to those final seconds. In his post fight interview, Glover assured fans that he’ll be fighting again, despite being 42-years old.