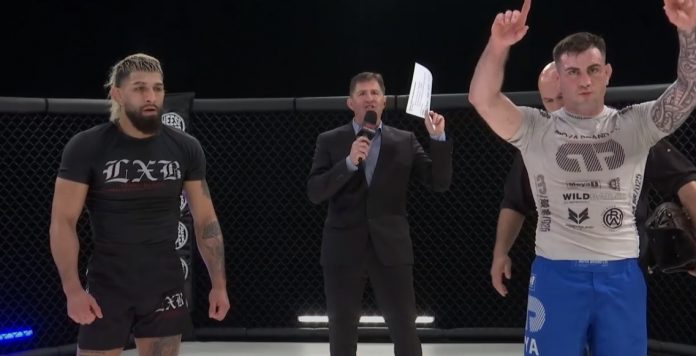 Tonight’s Submission Underground event saw male absolute champion Mason Fowler take on Andy Varela in the main event. Though the match went into overtime, Fowler only needed one round to finish the match and retain his title at SUG 22.

After some wrestling on the feet, Fowler pulled guard, and Varela wasted no time in getting on top inside his opponent’s half-guard to try to pass. As Varela pushed forward, Fowler threw up rubber guard, but Varela’s pressure and the competitors’ position against the cage limited his mobility. He transitioned back to closed guard and then got up to his feet and moved back to the center to pull guard again. In the final seconds of the match, Fowler transitioned to rubber guard again while Varela applied heavy pressure.

Overtime began with Varela on Fowler’s back, with Fowler getting his shoulders to the mat for an escape in twenty seconds. When Fowler took his opponent’s back, he triangled his legs with one leg on the inside and locked in a choke, submitting Varela nineteen seconds in the bottom of the first round of OT.

Fowler was declared the winner and retained his SUG male absolute title.