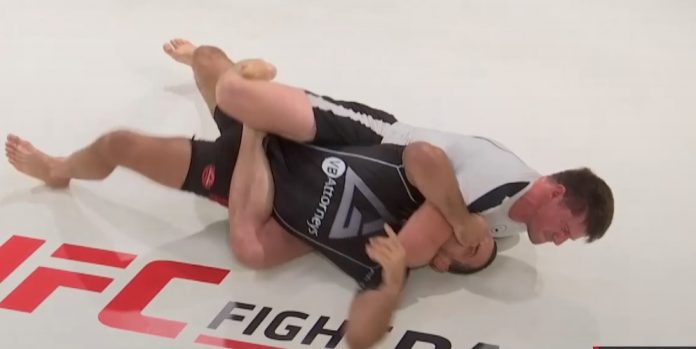 Submission Underground 24 put on an impressive night of matches, with an eight-man tournament taking place to see who would take home the $10,000 prize and get the chance to face current male absolute champion Mason Fowler.

Before Kyle Boehm took on Pedro Marinho in the finals, though, current women’s absolute champion Amanda Loewen set out to defend her title against Raquel Canuto.

Loewen pulled guard and grabbed Canuto’s ankles to off-balance her. Canuto quickly recovered and got to her feet to focus on passing. Loewen grabbed onto a leg as Canuto pressured down, and Canuto fought to remove her opponent’s grips. Loewen searched for a heel hook while Canuto countered with a toehold. Canuto disengaged on the toehold and came on top, applying heavy pressure even as Loewen kept one of her legs trapped. This didn’t deter Canuto from inching up and getting a reverse triangle on Loewen, isolating an arm in the process. Loewen got out, forcing Canuto to move to side control before Loewen got a shin shield in and kept it until regulation ended.

Overtime started with Canuto taking Loewen’s back, driving her face to the side. Canuto was mostly able to roll with Loewen’s escape attempts, managing to lock in a body triangle as time wound down. Loewen escaped with six seconds remaining.

Loewen started with an armbar attempt for her round of overtime, locking her legs to secure the spiderweb and maintaining it even as Canuto got to her knees. Loewen kept a hold of the arm as Canuto tried to step over, and time ran out with Canuto still stuck in the position.

The next round of overtime saw Canuto start on Loewen’s back again. This time, Canuto didn’t take long before getting the body triangle. Canuto worked to get her shoulders to the mat, but Canuto held on for the duration of the round.

Loewen then chose to start on the arm again, and Canuto stepped over her to try to free the arm. Still, Loewen held tight, and Canuto was again unable to escape before the bell.

At the top of the third round of OT, Canuto locked on hard to a neck crank. As the clock wound down, Canuto locked in a body triangle and tried to smother Loewen to no avail.

Loewen started off with an armbar attempt for the final round of overtime. Canuto got to her knees and stacked to get herself most of the way out, but Loewen triangled her legs and managed to hold on to the arm. Despite Canuto’s best efforts, Loewen held on until the bell, taking the victory.

Amanda Loewen was declared the winner via fastest escape time and held on to her absolute title.

Boehm immediately sat guard, and Marinho worked on getting a knee-cut pass. Marinho then sat back for a leg lock attempt, but was forced to bail on it after Boehm countered with a leg lock attempt of his own. Marinho resumed trying to pass his opponent’s guard — a struggle that continued for most of the remainder of the match. Boehm got to his feet with a minute left in regulation, appearing to try for a flying triangle with about thirty seconds to go and then going back to playing guard. Marinho tried to snatch up a foot a couple of times, but neither athlete was able to make anything see significant happen before the end of regulation.

Boehm won the coin toss and deferred to Marinho, who chose to start with an armbar. Boehm quickly rolled up to his knees and stacked his opponent, inching his way out in just under 30 seconds.

Boehm chose to take the back in the second half of the first OT round, immediately locking in a body triangle. He wrapped an arm beneath Marinho’s chin and locked it in as Marinho turned to his side. Marinho tapped with 1:14 left to go, and Boehm took home the win.

Kyle Boehm was declared the winner, taking home the $10,000 grand prize and earning the chance to compete against male absolute champ Mason Fowler on July 18 at SUG 25.