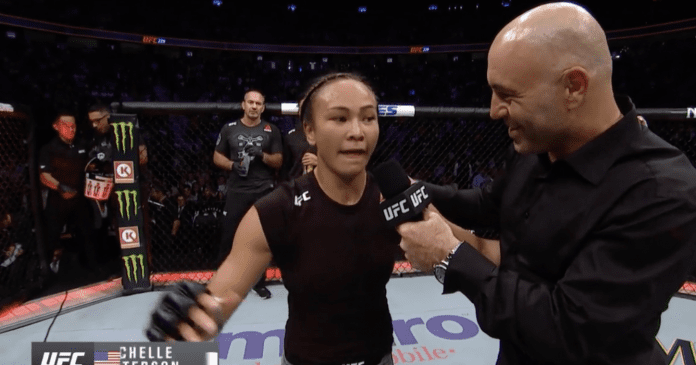 Michelle Waterson and Felice Herrig opened up the UFC 229 main card with some solid martial arts.

Herrig took the offensive immediately, charging in with punches and kicks. Waterson countered with a kick of her own. Herrig kept the pressure on and The Karate Hottie kept back peddling. Waterson slowed Felice down with side kicks to the thigh.

Felice charged in with a flurry of punches and pressed Waterson up against the cage. Both fighters landed some knees. Michelle pushed Herrig off the fence, but Lil Bulldog held on and brought The Karate Hottie back to the fence, pressing her there until the round ended.

Waterson lands the head kick, then goes to the ground and lands some nice elbows!@KarateHottieMMA #UFC229 pic.twitter.com/V0riY8na3H

Herrig started out with the pressure in the second round, but Waterson was a bit more aggressive, going for the clinch and even a takedown attempt.

Felice again pressed her opponent against the cage, but Waterson turned the tables and landed a huge elbow before backing up and landing a beautifully executed judo throw that put Herrig on her back. Waterson got in her opponent’s half guard, keeping Herrig down by putting her forearm on her neck. Herrig breathed heavy with her mouth open and looked like she was just trying to survive the round. Felice moved Waterson to full guard, later trying to get up and pass guard. She almost got caught in a triangle, but avoided the threat before the round ended…clearly in her favor.

Round 3 started with a side kick and later a head kick by Waterson. Herrig looked a bit more cautious than in the first two rounds. Herrig landed a takedown but landed in Waterson’s guard. The Karate Hottie landed some elbows. Waterson controlled the action from her back and Herrig struggled to land some punches.

The Karate Hottie went for an omoplata, but Herrig avoided it.

The referee stood the fighters up and Felice pressed Waterson up against the cage. Herrig went for a judo throw similar to Waterson’s, but couldn’t get it. Waterson pushed Herrig off and landed a side kick to the thigh. The Karate Hottie landed a front kick to the face, but Herrig stayed in it.

The two clinched and landed some knees to the body before the match ended.

Though the fight looked like it was in Herrig’s favor in the beginning, the Karate Hottie clearly did enough to impress the judges, and scored a unanimous decision victory over her opponent.