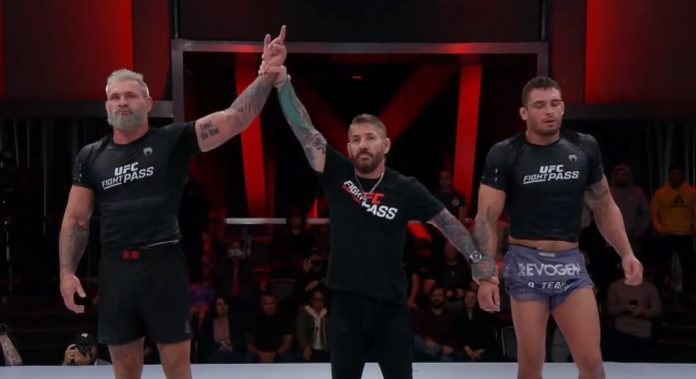 UFC Fight Pass Invitational 3 underwent some last minute chaos this week – including a late replacement in the main event. Nevertheless, the card showcased some highly impressive jiu-jitsu, including Gordon Ryan’s second defeat of late replacement Nicky Rod in a match that went the distance to overtime rounds.

The invitational also – in an effort to force action between competitors – featured “get down” rules, in which grapplers who failed to hit the ground in a timely fashion would be subject to a coin toss from the referee to determine starting positions on the canvas.

In a rematch between former DDS teammates — after Ryan successfully leg-locked his way to ADCC 2022 gold over Nicky Rod in the finals — the no-gi king looked to reprise his victory. Ryan pulled guard early, frustrating Rodriguez’s attempts to pass for much of the match.

However, Nicky Rod, for his part, has clearly made improvements since his ADCC match against the king, surviving far longer in the viper pit of Ryan’s guard than he did in his previous performance. Ryan finally found a leglock entry with seven minutes left in regulation. This time, however, Rodriguez – having learned the hard way from previous experiences in the same position – transitioned into fifty-fifty, before hiding his foot and attacking a toehold on Ryan.

The toehold, much to the shock of the audience, forced Ryan to abandon the heel hook attempt, putting both men back on their feet. Ryan pulled guard once more. This time, Rodriguez came slightly closer to passing, though Ryan continued to hold his former teammate at bay, forcing the pair into overtime rounds.

In overtime, both men escaped back control in the first round. However, in the second round, Ryan glued himself firmly to the back of Rodriguez, riding out the time for a full two minutes – though without a submission. Ryan then pulled ahead on ride time by escaping Rodriguez’s back control in just thirty seconds, forcing the two into a third and final round of overtime. This time, Rodriguez was the one who managed to ride out the full two minutes – with Gordon counting down time, and refusing to tap to Nicky Rod’s rear-naked choke until after the clock ran out.

Ultimately, Gordon won the bout on fastest escape time – but Nicky Rod certainly turned some heads with a more impressive performance than most fans expected.

“[Nicky Rod] knows how dangerous I am,” Ryan said in a post-fight interview on the canvas. He admits, however, that the match was hard fought, describing that final round of overtime: “My teeth were getting crushed, and then I saw the timer, and I was like, ‘Oh, the time’s run out!’”

Ryan added that his motivation to continue competing in jiu-jitsu comes down to a desire to push the sport forward, and to put jiu-jitsu in the pantheon of mainstream athletic entertainment.

So close for Nicky Rod!!! But we are going to escape time!! #FPI3 pic.twitter.com/3ObYx8OmBu

Bia Mesquita, often called the “Lady GOAT” of submission grappling, took on former UFC bantamweight champion Miesha Tate in the co-main event – but with one arguable handicap against Mesquita, an ADCC podium finisher: no leglocks would be permitted for this match.

If that fazed Mesquita at all, she certainly didn’t show it. Jiu-jitsu’s Lady GOAT entered an aggressive hand-fighting battle against the former UFC champ, before pulling closed guard and sweeping Tate onto her back. Mesquita appeared to attempt a wrist lock from mount, which Tate defended. Switching tactics, Mesquita attacked an Americana, still holding the mount position, which Tate also defended.

Tate finally escaped Mesquita’s at the two-minute mark – no easy feat. However, Mesquita remained relentless, scrambling promptly to north-south, where she proceeded to isolate an arm, forcing an entry into back control. Mesquita, now riding Tate’s back, attempted to hunt for a choke, but Tate was ultimately able to ride the clock out into EBI overtime rounds.

Mesquita chose to open overtime rounds from her patented armbar position, where she locked up the submission at 1:20. Her successful escape during Tate’s attempt to submit from the same position secured a hard-fought victory for the Lady GOAT.

In a post-fight interview on the canvas, Mesquita explained, “I think, today, [wanting to show that] my grappling is the best in the world, motivated me a lot.” She encouraged grapplers who watch her matches, regardless of academy or team affiliation, to believe in themselves. “One day, you can be here,” said Mesquita.

Mesquita, who’s previously expressed an interest in transitioning into MMA, added that the chance to do her “last grappling fight” against Miesha Tate was an honor for her. “Now, I feel that I’m ready to take the next step, and do my MMA debut in 2023.”

Whether this indicated a retirement from competitive grappling for the Lady GOAT remains to be seen – but her fanbase will certainly be eyeing her MMA debut with interest.

What a match! Bia gets it done!

The 8-man absolute tournament opened with a scrap between Haisam Rida and underdog Patrick Gaudio. When some cautious hand-fighting failed to result in a takedown, and neither man pulled guard, the get down rule put Gaudio in Rida’s butterfly guard. Rida quickly bailed on the butterfly in favor of closed guard. A sweep from Rida forced both men into a brief scramble back to their feet. This time, Gaudio elected to sit to guard. The two exchanged positions several times, before Gaudio locked up a triangle on Rida to punch his ticket to the semis.

Next, we saw sixteen-year-old, 253-pound leg lock specialist Pat Shahgholi take on ADCC 2022 alum Mason Fowler. Shahgholi sat immediately to guard and began hunting for his signature leg entries on Fowler, who passed aggressively into north-south. Fowler transitioned into mount, where he secured an armbar for a victory over “adult slayer” Shahgholi.

In the third match of the quarterfinals, 10th Planet’s Andy Varela gave up approximately fifty pounds to face rising New Wave star Luke Griffith. Griffith elected to sit guard against Varela, who launched several aggressive passing attempts that led to a series of sweeps and scrambles, ultimately landing Griffith in mount, but with no submission – putting these two into the first EBI overtime round of the evening, where Griffith won by rear-naked choke.

Finally, Canadian sensation Oliver Taza faced off against Richie “Boogeyman” Martinez, a 10th Planet icon. Taza pulled guard immediately. With Boogey unable to pass successfully despite a few close attempts, both men wrestled back up to their feet. This time, Boogey was the first to pull guard. Taza, however, locked in a heel hook with a couple minutes left on the clock, cementing his place in the semis.

In the first round of the semis, Mason Fowler faced Patrick Gaudio, who elected to pull guard. Fowler set up a promising pass off an underhook, but got flipped on to the bottom while hunting a back take, forcing him to briefly play guard himself. Fowler pulled rubber guard, allowing him to use a meathook position to set up a triangle choke on Gaudio that ultimately punched Fowler’s ticket to the finals.

Next, Oliver Taza went to work against New Wave teammate Luke Griffith. Taza pulled guard immediately, landing both men in a leg entanglement. Griffith, making use of a major size advantage, eventually scrambled into north-south. Taza deftly recovered half guard, but continued to struggle against Griffith’s weight, as the bigger man inched his way toward quarter guard. Taza, looking to regain positional strength, entered another leg entanglement. Griffith once again ensconced himself in a north-south position, before transitioning to Taza’s back, where he locked up a body triangle, and eventually, a rear-anked choke to secure his victory just inside of regulation time.

In a showdown for the $25,000 cash prize, Luke Griffith and Mason Fowler faced off, with Griffith immediately sitting to guard. Fowler, wasting no time, set up a knee cut, before hip switching to pass rapidly into north-south. Despite several impressive attempts from Griffith to escape, Fowler controlled top position until the final minute of regulation time, until a transition to mount gave Griffith the opportunity to buck him over. Fowler, now on his back, pulled his famous rubber guard – the same position from which he’d previously submitted Patrick Gaudio. However, Griffith was able to hang on until regulation time expired, forcing Gaudio to face him in overtime rounds.

Griffith opened overtime rounds on Fowler’s back, but Fowler made quick work of escaping. Griffith, for his part, also escaped Fowler’s back control, putting the two finalists into a second round of EBI overtime. Both men once again escaped. A third round saw escapes yet again. Cumulatively, those overtime rounds gave the victory to Mason Fowler for fastest overall escape time, and crowned him the evening’s absolute tournament champion – with a $25,000 winner’s purse to boot.

In a post-fight interview on the canvas, Fowler good-naturedly joked that he felt fortunate to face the 21-year-old Griffith “while I can still beat him,” and predicted that Griffith, once he reached his prime, would go on to become ADCC world champion one day.

Mason Fowler!!! On to the semi-finals! #FPI3 pic.twitter.com/pJ44RYZLI5