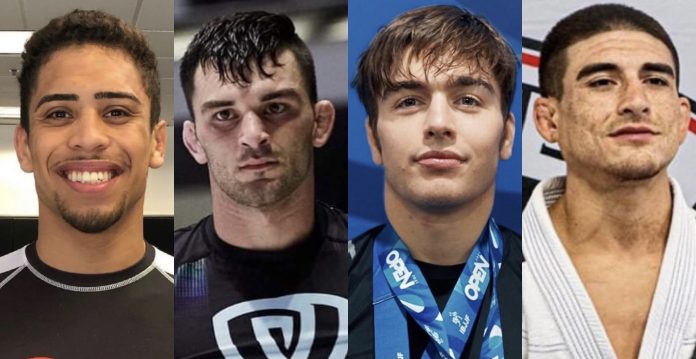 We are sure to see fireworks because this is a stacked bracket with ten of the sixteen competitors ranked in the top-10, rooster weight, featherweight, and lightweight categories. Who is going to go all the way?

But just because they are the favorites does not mean they will win.

You can’t count out Gianni Grippo, Luis Quinones, Frank Rosenthal, Keith Krikorian, Damien Anderson, Richard Alarcon, or Estevan Martinez, who are all ranked in the top 10 in their respective weight classes.

Not to mention a few newcomers are attempting to make ripples in this tournament, David Weintraub, John Battle, Cameron Mellot, and a few other names. Will there be any dark horses who stir up trouble?!

This Emerald City Invitational is loaded with talent, and you don’t want to miss out.

Let’s dive deeper to see how it may play out.

This is an EBI Rules tournament which makes it even more enjoyable.

Because right now, you have IBJJF No-Gi World Champions such as Grippo and Maciel.

You also have guys who’ve been training EBI-style tournaments for years: Frankie Rosenthal, Luiz Quinones, Damien Anderson, etc… And you have ADCC veterans like well— Grippo, Alarcon, Maciel, and Krikorian.

This is a diverse set of grapplers with opposing skills that favor different rulesets. They are all competing under one set of rules that (tend to) favor a “submission-only” pace of play.

In Bracket A of the tournament, Maciel, Martinez, Rosenthal, and Cisneros compete against each other.

In Bracket B, Anderson, Grippo, Krikorian, Sousa, and Alarcon battle it out.

We might even witness Maciel vs. Cisneros in the semifinal matches of Bracket A, which is an ongoing rivalry between the two competitors that we’ve seen play out twice before.

Earlier this year, at Fight to Win 169, Maciel beat Cisneros, and then last week at Fight to Win 179, Cisneros returned the favor to the 2019 ADCC Silver Medalist. I would bet my limited-edition Craig Jones “Only Fans” rash guard that we see these two youngsters clash again in the semifinals.

That said, the men who have a lower chance of winning their matches will be David Weintraub, Cameron Mellott, and Jeff Rock. So, let’s count them out for now.

I’m super excited about the opening match— Luis Quinones, the No. 8 ranked featherweight, vs. Estevan Martinez, the No.1 ranked No-Gi rooster weight who goes by the nickname “Giant Slayer.”

Quinones is an EBI veteran, stalwart wrestler, and has a size advantage over Martinez. But Martinez is coming off a hot year with him claiming Gold at the No-Gi Pan American championships.

And so far, size has not been an issue Martinez could not overcome.

However, in this particular match, I think size will be a mountain he can’t climb over because he’s going up against a guy who has tons of experience in the EBI ruleset, only trains No-Gi, and has a strong wrestling lineage.

I think Martinez will be able to fend off Quinones’s onslaught but will eventually succumb to submission in the 2nd half.

Ultimately, we will see Maciel, Cisneros, Rosenthal, and Quinones in the quarterfinals, with Maciel and Cisneros advancing to the semifinals of Bracket A.

Although Rosenthal and Quinones are experienced in the EBI ruleset, I don’t think they will be able to withstand Cisneros’s and Maciel’s wrestling pace or passing pressure.

Now, the finals match of Bracket A is tough to predict because these two athletes are 1–1 against each other.

That said, based on the ruleset and the level of No-Gi experience between the two competitors, I think Maciel will have a “slight” advantage over Cisneros and come out victorious.

Maciel will use his experience in the No-Gi circuit to change his style of play against Cisneros. Instead of wrestling with him, he will sit guard and attack lower body submissions, aiming for a heel hook finish.

And if the heel hook isn’t there, he will use his leg entanglements to transition into an upper body attack—while always searching for back control and potentially finishing the match via strangulation.

…. But once again, this match is hard to predict because the competitors are evenly matched.

On the opposite side of the bracket, Suraj Budram and John Battle don’t pose as much threat to the other bracket members. And if I’m not mistaken, Elias Anderson is out due to injury.

The most challenging opening match to predict will be Damien Anderson vs. Richard Alarcon. Damien will opt to sit guard and not wrestle with Alarcon, which will nullify his wrestling.

In terms of the ground matchup, Damien has an incredible guard, good entries into leg entanglements that set up an outside Ashi/outside heel hook finish, and he’s a very intelligent grappler.

On the other hand, Richard Alarcon has tremendous pressure, explosive wrestling, and is heavy with his guard passing. Not to mention, he is an ex-NCAA Division 1 standout wrestler, an ADCC veteran, and Combat Jiu-Jitsu veteran.

But based on their grappling resumes, I predict Alarcon to win, if he can lure Anderson into wrestling and tire him out.

That said, if it gets to overtime, I think Damien Anderson will submit Richard Alarcon via rear-naked choke.

This leaves the quarterfinals with Grippo, Krikorian, Sousa, and Alarcon.

When Grippo faces Krikorian, he will lose.

Now hear me out. In any other ruleset, Grippo would defeat Krikorian. But under the EBI rules, which don’t allow points— Grippo will not be able to play his game.

Although Gianni Grippo is one of the top competitors of his generation, his primary focus is on Gi competitions. And although his submission rate, according to BJJheroes, is 28%…. 43% of that 28% is in the Gi.

This means his submission rate (in general) in No-Gi competitions is low.

And under a ruleset with no points, the chances of him winning are even lower, especially against another ADCC veteran like Keith Krikorian whose been training strictly No-Gi for the majority of his career.

Now, in the case of Sousa vs. Alarcon, I will have to go with Alarcon. The match may play out differently in a points-based competition, but I see Alarcon submitting Sousa in EBI overtime under a submission-only ruleset.

The ADCC veteran and Combat Jiu-Jitsu veteran has too much experience under this rule compared to the No.4 ranked featherweight in the world.

This leaves Alarcon vs. Krikorian in the semifinal’s matchup. And I think Alarcon will take the victory because Krikorian has not competed much since 2019.

Their grappling resumes are almost identical.

That said, Alarcon has been competing and improving his competition game while Krikorian has been out of commission.

And remember, more competition experience under a specific ruleset will only advance your game further.

I predict the final matchup of the 2nd Emerald City Invitational Tournament will be Kennedy Maciel vs. Richard Alarcon, which is reminiscent of the 2019 ADCC championships.

This will be an exciting final, an ADCC silver medalist vs. an ADCC veteran.

The last time these two competitors met, Alarcon only lost by two points, which was under a hybrid ruleset where Kennedy could not submit Alarcon.

This time points are not allowed, and both competitors wrestling prowess’s don’t matter as much— emphasis on as much. I forecast there will be no submission during regulation, and we will see these two competitors duke it out in OT.

If this happens, I think Kennedy Maciel will submit Richard Alarcon via rear-naked choke or Juji-gatame. Maciel has a knack for both submissions, as we’ve seen in his matches against Tye Ruotolo, Joshua Cisneros, Junny Ocasio, and Geo Martinez.

Alarcon may have better breaking mechanics this time around and ultimately submit Kennedy Maciel via rear-naked choke or Juji-gatame.

These are my predictions. What are yours? 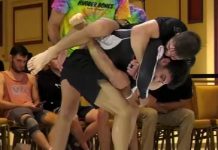