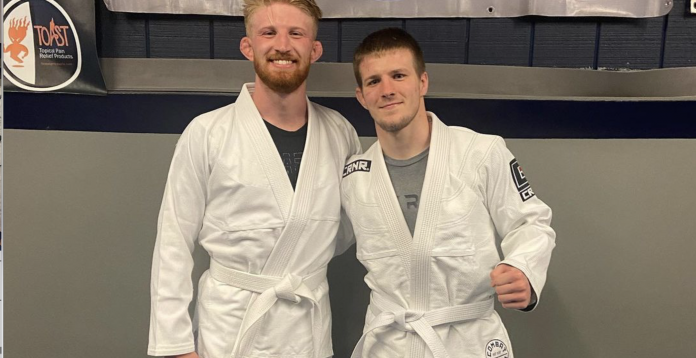 Nolf, a Pan American champion in freestyle wrestling, and Nickal, who won the U23 World Championship last year, are both three-time NCAA Division I folkstyle champions. Recently, they’ve been expanding on their skills on the mats with the help of The Mat Factory‘s Isaac Greeley in the Pittsburgh area.

“I coached Jason as one of his club coaches at The Mat Factory throughout his high school career and I’ve been close with him since,” Greeley, a BJJ black belt himself, told the Jiu-Jitsu Times. “I definitely have infused a lot of grappling techniques with wrestling as a high schooler and still do when we get together now, although I can’t say we ever really just focused on BJJ until recently.”

Greeley says that he’d trained with Nickal “a handful of times” before, and over Christmas break, he did some grappling training with the athletes (Jason’s wife, Utah FC Royals player Maddie Nolf, also expanded her athletic skills by getting on the mats).

“Bo has trained at ATT Coconut Creek; he is looking to transition into MMA after wrestling, so he has some solid grappling experience and has had great coaches work with him there as well,” says Greeley. “Jason, like Bo, has a perfect wrestling style for BJJ because of his creativity and ability to scramble at a very high level. They both also have great pressure, an uncanny feel for positioning, and learn extremely fast, as you can imagine.”

Greeley praised the wrestlers’ humble personalities and their “excitement to learn,” adding that both Nickal and Nolf have intentions to continue their progress in BJJ following the Olympic Freestyle Trials that are set to take place in a few months. “I also believe they both will compete and at a very high level in the sport of grappling. I’ve witnessed what they can do with limited knowledge and it’s incredible,” he says.

Nickal has already competed in BJJ, lasting about 13 minutes under a modified rule set against Gordon Ryan before getting submitted in the 3rd Coast Grappling III main event. Might we see him and Nolf competing in the gi sometime in the near future? Only time will tell.