We’ve been featuring a lot of jiujiteiros lately who have overcome various hardships to train and excel in jiu jitsu.  I recently had an opportunity to chat with a gentleman who lost use of his legs as a purple belt and is now a black belt.  Yves Carbinatti, a Team Atos black belt under Ramon Lemos, has in many ways worked the difficulties with which he was posed and is even set to take on the first of its kind, a super fight between two competitors with disabilities at the ADCC this weekend with Eduardo Mangaravite another disabled jiujiteiro.

“I’ve been training jiu-jitsu since 2001. When I had the accident, I was a purple belt.  In September 2008 I was in a car accident.  I was sleeping in the back seat of the car when my friend lost control of the vehicle and flipped eight times.  I was thrown out of the vehicle and had a spinal cord injury.”  The outlook for most people with spinal chord injury is tough, when you lose use of your legs a sport like jiu jitsu can be nearly impossible, no more guard no more takedowns, Yves had to modify the entire sport to accommodate only using his upper body. 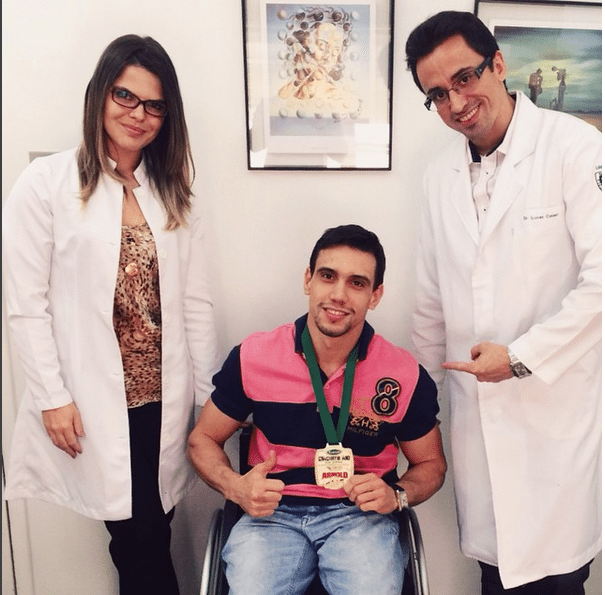 “I returned to training two years after the accident. I graduated a brown belt in jiu-jitsu in 2012 and received a black belt in 2014.”  Coming back to jiu jitsu after injury is difficult even for able bodied athletes, Yves’ return was after losing use of his lower body in a sport/art in which use and dexterity of the lower body is synonymous with success and potential.

“I managed to maintain all movements of the upper limbs. However, all positions that needed the legs, I began to adapt to the new reality (without leg movements). I started working very arms. I started fitness training to improve performance in BJJ.”  BJJ Is a highly athletic sport, Yves just lost what many think of as the most athletic region of his body, and wanted to continue growing and improving in BJJ.

As many who are probably reading this I was very curious about whether or not legs factor in at all for Yves, either as a weapon or a means for an opponent to submit him “I have no leg movement. I do not use them for BJJ. People do not try leg lock because I have no sensitivity, so I would not tap if someone took a leg lock.” 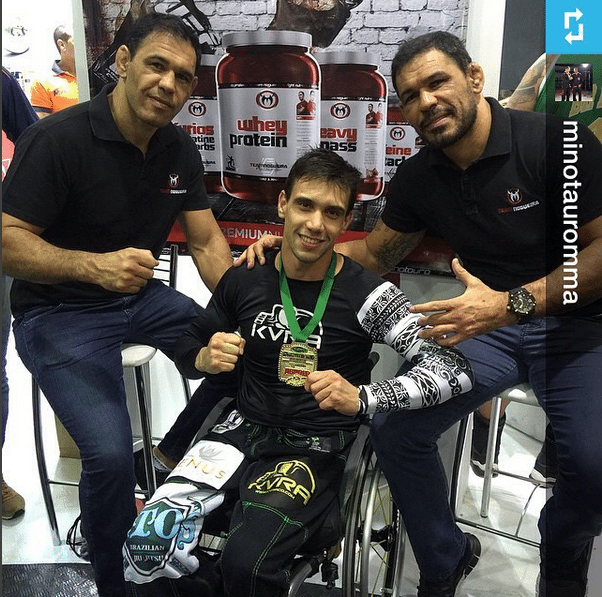 But how on earth can someone without their legs do jiu jitsu?  “I had to think about adaptations. Think about how I would be agile without using the legs. So it was very different, but very pleasing to know that was back training with the whole team.  Grips are very important. The secret is always to keep the fight for the position that is in my favor. Place the person on his back on the mat and work hard attacks to not give the person time to find a better situation.”  The logic is that because Yves can’t fight every kind of fight, he has to dictate the types of battles that he allows himself to be pulled into.

Due to his high rank, mat prowess, charisma and eloquence Yves is an ambassador for the disabled Jiu Jitsu community.  Thus he has been involved in different tournaments and events “The rules have been adapted, according to physical condition. I am an ambassador of jujitsu and submission grappling for people with disabilities.  We made the first championship for the category of people with disabilities. In the World Pro tryouts in Gramado – Brazil. We made the classification according to each disability and we began to develop the categories for these athletes.”  Yves is consistently setting the bar for jiu jitsu competition for the disabled “I will fight in ADCC this Saturday in a super fight… The first of its kind in the world.”

In closing Yves wanted to share some of his future plans as well as shout outs “I would like to have the opportunity to go to the US, to train and do seminars; motivate people. I would like to thank my coaches Ramon Lemos, Eduardo Mendes and all the Atos Jiu Jitsu team, for always believing and motivate me to train and overcome challenges. I will fight the ADCC world and I want to win this title, which will be the first time we will have a fight for people with disabilities in the event.”

The community of disabled jiujiteiros is small.  The sport is very difficult even for able bodied people; add in major physical issues and it seems daunting.  People like Yves show us all what a person can do if they put their mind to it, he is both a beacon of hope for disabled people who are interested in the sport as well as an example for all of us to never make excuses and merely work around our individual situations.