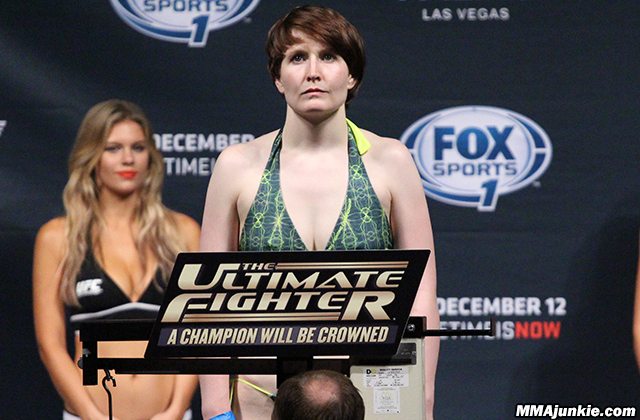 To work so hard up until fight day and not make weight is any sport competitors worst nightmare (well, one of them). Oliveira & Aisling both missed weight and therefor had to forfeit a portion of their purses. For the rest of us, the DQ would have been waiting in the wings, shrieking with delight as we walked away from the scale in shame. One pound and two pounds shy, respectively, you have to wonder what the heck happened?! And while Aisling was given quarter to weigh-in again within an hour she declined, losing 20% of her purse. I don’t know about you, but I’m torn on this one… is the cut or losing the purse worth it in the end?

Regardless Aisling went on to win her Friday night debut by armbar; ending the match at 4:53. Aisling’s been on the MMA scene for a while, her time on Ultimate Fighter 20 proving she’s got heart, focus and determination. I don’t think we’ve seen the last of this Irish scrapper.
Here’s a little clip from The Ultimate Fighter. Aisling comes out fighting and doesn’t quit.