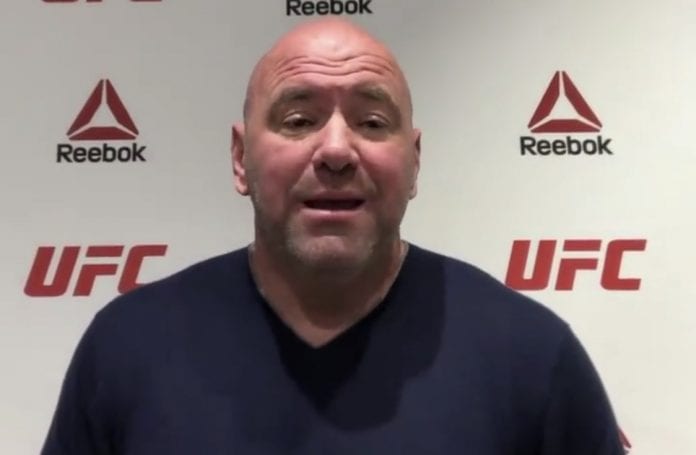 In the ongoing circus that is Colby Covington’s UFC career, it seems some of the ringmasters and animal wranglers are getting tired of Covington’s bad boy, antagonist, red hat act. The “Make MMA Great Again” fighter further escalated his feud with Big Daddy Dana White this week, telling Submission Radio that he won’t allow the UFC honcho to wrap the welterweight belt around his waist should he actually defeats Kamaru Usman at UFC 245.

“If he tries to wrap it around my waist, I’m gonna take the belt from him and slap him in the face with it,” Covington said during the episode.

Which of course drove reporters at UFC’s Boston fight night to ask White what exactly he thought of his contender’s commentary.

All this beefy, juvenile nonsense goes back about a year, when Covington was interim champion but stripped of the title for being unable to face Tyron Woodley for the challenge at UFC 228. And then denied the chance to get his belt back when Usman was tapped to fight Woodley, defeating him with almost shocking ease to become the champion. Which was eventually followed by Covington showing up at a Vegas casino where White was playing cards, confronting him about not getting the fights he wanted when he wanted, and streaming the whole macho display of defensiveness via his Instagram. (A ballsy pass at conflict resolution, but not exactly effective. White was not thrilled.)

It was reported that the pair eventually patched things up enough to make the Robbie Lawler vs. Covington fight happen, but not enough to make contract negotiations for this forthcoming Usman title challenge smooth.

And so here we are. Usman and Convington is nigh. Whether White, or anyone else, will be wrapping a belt around Colby’s waist? Who really cares, just pass the peanuts and popcorn and watch the show.