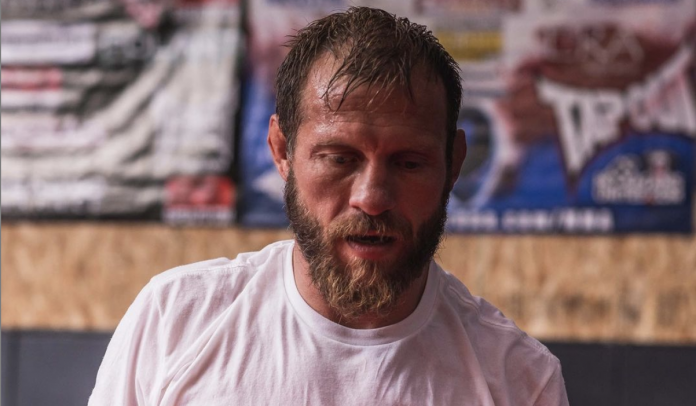 The Submission Underground 19 match between Rafael dos Anjos and Donald Cerrone ended with an overtime submission, though dos Anjos insisted that despite what it looked like, he wasn’t tapping out. What followed was an unprecedented and controversial choice to let the competitors redo an overtime round to determine the winner.

Dos Anjos started the match by pulling guard, and he reversed the position quickly, but Cerrone got out and returned the match to the feet. Dos Anjos then scooped up a single-leg, which was defended well by Cerrone, but dos Anjos was persistent with his takedown attempts. After a duck-under by Cerrone, dos Anjos pushed his opponent against the cage, ultimately deciding to pull half-guard. Dos Anjos swung Cerrone back and forth until he got the sweep and briefly worked to pass Cerrone’s guard, but Cerrone quickly returned to his feet. Dos Anjos was relentless with his takedown attempts, then opted to pull closed guard. Though he tried to sweep Cerrone, the latter was able to keep dos Anjos down until regulation ran out.

Overtime began with dos Anjos on Cerrone’s back, and Cerrone escaped in about 28 seconds. Cerrone then took the back and locked in a body triangle, but it wasn’t enough to keep dos Anjos contained for more than nine seconds.

The second round also saw dos Anjos on the back, and Cerrone got out in just seven seconds. Cerrone opted to attack the arm, and as dos Anjos tried to roll out, he appeared to tap out while pushing on the knee, but he insisted that he didn’t tap out. Still, Cerrone was declared the winner by submission in overtime. After the match was over, Cerrone offered dos Anjos an immediate rematch, but Chael Sonnen said that a rematch during the same event wasn’t going to happen.

During the main event, however, Sonnen revealed that the competitors and officials at the event had agreed to let dos Anjos and Cerrone redo the overtime round. Sonnen expressed that he wasn’t happy with the decision, but that the referee was the only person who could stop it from happening. The referee allowed it, and Cerrone and dos Anjos returned to the mats after the main event had ended.

Cerrone won the coin toss and deferred to dos Anjos, who chose to attack the arm. For a moment, it looked like he might tap out Cerrone with a belly-down armbar, but Cerrone managed to jump over and pull his arm out. Cerrone then chose to attack the arm, wrapping up dos Anjos’ leg at first and then working to extend the arm. He succeeded, and dos Anjos gave an obvious tap in 23 seconds. Cerrone was again declared the winner via submission.