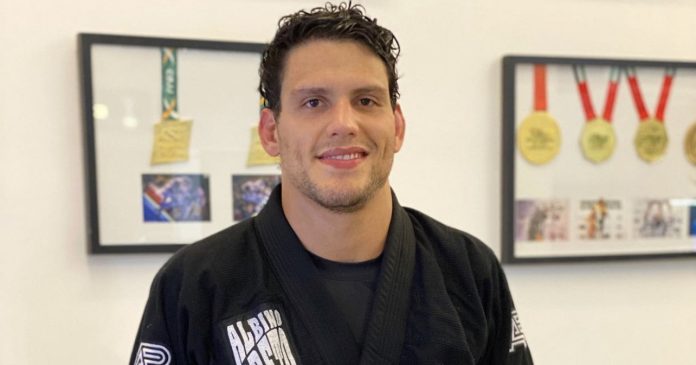 Felipe Pena has been active, preparing for his next rematch against Gordon Ryan in August, and then competing at ADCC’s 99+ kg division in September. Now, Pena’s name is in headlines again. Except this time, it’s because he’s gotten himself into a bit of a situation.

It has been officially reported by the U.S. Anti-Doping Agency(USADA) that Pena has tested positive for Clomiphene and its metabolites after an in-competition drug that was administered at the 2021 IBJJF World Championships.

Clomiphene is a Specified Substance in the class of Hormone and Metabolic Modulators and is prohibited at all times under the World Anti-Doping Code and the USADA Protocol for Olympic and Paralympic Movement Testing, which applied to the 2021 IBJJF World Jiu-Jitsu Championships.

Clomiphene is most notable in the athletic community for being used as a post-cycle therapy(PCT), which assists the body in returning to homeostasis after the impact of Anabolic Steroids has shut down the production of many natural hormones.

Pena has previously tested positive for Testosterone, an anabolic steroid, in 2014 after winning the IBJJF World Championship. At that time, he stated that the positive test result was due to a testosterone cream that was prescribed by his healthcare provider. He was subsequently stripped of his title and issued a 1-year suspension.

Pena responded to the recent news with an instagram post. He states that he was unaware that his doctor, Dr. Felipe Pereira, had prescribed Clomiphene for non-sports related health reasons. He also states that the suspension was reduced from 4-years to the minimum of 1-year, as USADA had determined that it was not intentional,

“So guys, I feel obliged to come here and be transparent with those who like and follow my work since forever! You who follow me, like my personality, my jj, you are always supporting me, cheering and vibrating along with the achievements of my career… In January 2022 I received an email from USADA informing me that my Worlds exam showed a paltry amount of a substance called Clomiphene. As soon as I received it I contacted my doctor Dr.Felipe Pereira and he told me that he had actually prescribed clomiphene for health reasons, nothing to do with my athletic life, in July/21 (5 months before the Worlds) when they had announced whether or not there would be a Worlds because of the covid. Clomiphene is a drug sold over-the-counter in any pharmacy without any prescription or restriction… From the first moment I told usada what had happened and after all the investigation done by them they decided to reduce my sentence from 4 years to the minimum sentence of 1 year because they agreed that it was not something intentional, which did not alter my performance at all and for being the substance that it was. I believe that USADA’s work is important in any sport but even though this is all proven by them according to article 9, this would be the minimum penalty for tests done in competition and I don’t think it’s fair. During the process I was even informed that if I had written a pre-competition letter informing me of what had happened, I would have had no problem, but due to inexperience and carelessness this ended up happening. I just wanted to say that I have a clear conscience, I’m still focused and motivated with the next goals. I’m sure there’s a lot of good things to happen very soon, just thank you for the support of all of you who are always here following my routine, good and bad times. We are always together 🙏🏼”

USADA does offer athletes the opportunity to disclose their medications and obtain permission, which Pena says he didn’t complete due to ‘inexperience and carelessness’.

Pena’s one year of ineligibility began on January 7, 2022. He has been disqualified from all competitive results achieved in competitions sanctioned by the IBJJF, or any Code signatory, on and subsequent to December 12, 2021, the date his positive sample was collected, including forfeiture of any medals, points, and prizes.

There is not yet any word on how, or if, these rulings might affect his matches in WNO or ADCC this year.

USADA makes available a number of ways to report the abuse of performance-enhancing drugs in sport in an effort to protect clean athletes and promote clean competition. Any tip can be reported using the USADA Play Clean Tip Center, by text at 87232 (“USADA”), by email at playclean@USADA.org, by phone at 1-877-Play Clean (1-877-752-9253) or by mail.