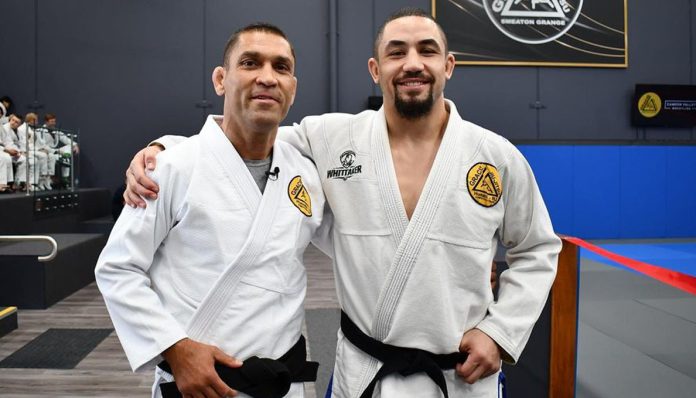 This Saturday at UFC 271, Israel Adesanya and Robert Whittaker will face off in a 5-round Main Event for the UFC Middleweight Championship.

This is their second time meeting, the last time being a championship bout at UFC 243 on October 6, 2019, which Izzy won by KO in the 2nd round, marking the only loss on Whittaker’s record since 2014. In his last fights he holds a record of 12-1.

This time around, Whittaker looks to defeat Adesanya and reclaim the undisputed Middleweight title. Perhaps his best chance may come from his grappling, as he holds a BJJ black belt, an Australian Wrestling Championship Gold Medal, and his camp for this fight was at Gracie Jiu-Jitsu Smeaton Grange

In an interview with MMAJunkie, Whittaker told reporters,  “I would love to be able to get him on his back and to work on the ground… It’s no secret that the greatest advantage anyone would have with ‘Izzy’ is on his back where he can’t use his long arms and long legs to hit you. It’s no secret.”

This strategy would make the most sense, as the only loss marking Adesanya’s record is a 5-round unanimous decision to Jan Blachowicz, where Blachowicz was successful on 3 out of 5 takedown attempts and amassed 7:06 of control time on the ground. Whittaker noted the success that Jan’s strategy had, “I think Jan set a blueprint on how to beat him.”

Whitaker has won 5 fights by way of submission, but his most recent was in 2011 under the Legend Fighting Championship promotion. He wouldn’t join the UFC’s roster for about another year.

The cage doors will close in Houston, Texas this Saturday, February 12. Prelims start at 3:00p.m. PT on ESPN+. The main card begins at 7:00p.m. PT and can be purchased on ESPN+ PPV.