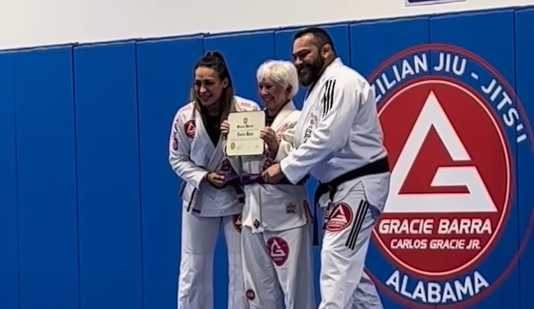 Elaine Wynn, 74, known to her social media followers as “the Jiu-Jitsu Grandma,” earned her jiu-jitsu purple belt this week. A longtime student at Gracie Barra Alabama, Wynn posted a video to her Instagram page on Monday to commemorate the promotion.

In the video, an ecstatic Wynn can be seen running down the imposing line of black belts to hug each of them. “I had to go hug Professor Pedro and Professor Leo …and then, of course, Professor Kayron Gracie,” wrote Wynn. “I just keep going down the line of amazing black belts.”

Wynn’s post about her promotion has garnered upward of 4,000 likes on social media, and a flood of congratulatory comments from the broader grappling community. Masters world champion and Roll Forever founder Betty Broadhurst, who earned her black belt – along with a brown belt masters world title – in her sixties, wrote, “Biggest congrats to you!! I am so proud as a Masters female & competitor to watch and understand your journey!!!”

Wynn’s Instagram bio, which describes her as a grandmother of seven, includes the motto, “Not [too] old and not too late.” It’s an attitude that’s clearly served her well in her sport of choice, and one that will hopefully encourage other older practitioners to hit the mats.