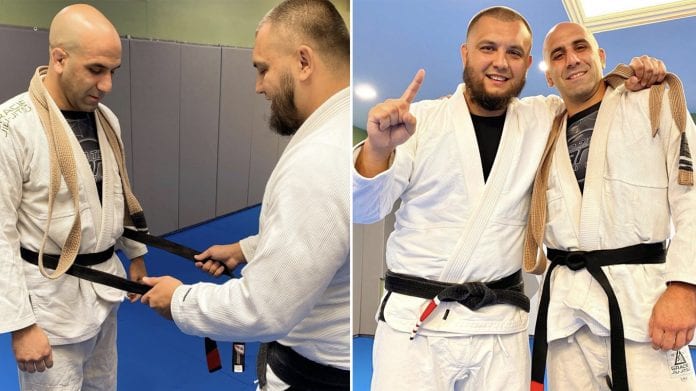 Another Jiu-Jitsu Times writer has made it all the way to black belt!

Arman Fathi, who currently trains out of California, received his belt from Eddie, Adem, and Idriz Redzovic, becoming Idriz’s first BJJ black belt in the process. He started his jiu-jitsu journey at 248 lbs and lost 75 lbs in his first year of training. He credits the martial art with helping his “health, sanity, and relationships.”

Here’s what Fathi had to say about his journey to black belt:

“As a four-stripe blue belt, I moved to Indianapolis and trained with Marcello Monteiro (black under De La Riva — mind you, Monteiro runs his own organization called BJJ Coach) before moving back a year later and being awarded purple the day I returned from Idriz. Also as a blue belt, while training at Redzovic, after Eddie Bravo’s Metamoris match versus Royler Gracie, I became hooked on the system and signed up at 10th Planet Chicago under Josh Passini.

As a purple belt, life took me to the suburbs of Chicago, where I spent extensive [time] with Professor Anthony Ferro (Christian Uflacker black belt), Omar Ocasio (Eddie Bravo black belt), and Carlos Lemos Jr (Carlos Gracie Jr black belt). I moved out to California for school after a couple years and signed up at Checkmat La Habra with Lucas Leite, [10th Planet HQ with] Eddie Bravo, and Gracie University with Rener and Ryron Gracie. After about eight months, three schools was too much time and financial burden, so I let go of Checkmat and split time with Eddie and Rener/Ryron for the next two years.”

Fathi says that COVID-19 didn’t slow him down, and he took no time off. He flew back to Chicago for the week, and Adem and Idriz Redzovic told him that he was ready for his black belt.

“As a technicality, I wanted to get it from Idriz to be his first. Idriz said he wanted to get on the phone with Rener and Eddie — both guys approved and gave their blessing. That meant a lot to me. It brought it all full circle. When I moved here, the Gracies were cool with giving stripes, but it was mutually agreed that the Redzovics’ was where I started and where I’d end.”

Though Fathi has competed more since earning his brown belt and living in SoCal, he prefers his focus to be on teaching “while continuing to dabble in competing.” In fact, he just got his Level 1 teaching certification from Gracie University. Even now, he knows what he wants his legacy to be.

“If I die tomorrow, I want to be remembered as a consummate student of the art, that takes his time watching the DVDs Kitt [Canaria, JJT founder] gives me to review, that trains 5-6 days a week twice a day for eight years non-stop, that showed up every day to watch even if I was hurt, that loves this art and gives myself to it selflessly. I love jiu-jitsu, I love everyone it’s put me around, and I am on good terms with all the guys I trained with. I’m still shocked. I’m literally lying in bed next to my belt right now, it’s complicated.”

Congratulations, Arman, and thanks for being such a special part of our little team!