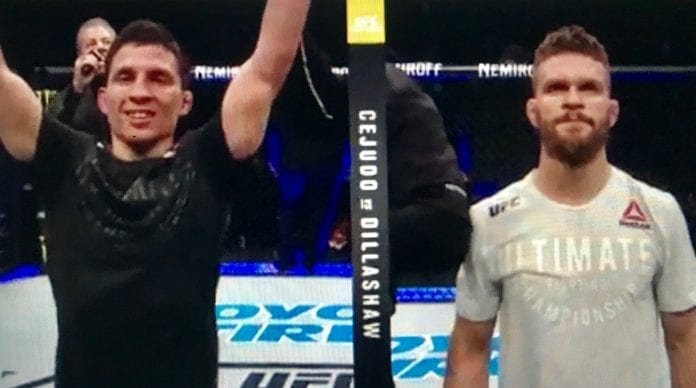 After four years the great equalizer was grappling.

Joseph Benavidez won by decision at the Barclay’s Center on January 19, edging out rival Dustin Ortiz with dominant grappling in the pair’s 125lb. rematch. Benavidez and Ortiz originally faced off in November 2014 with Joe pulling out an unanimous decision victory.

The UFC Brooklyn face off predictably opened with strong wrestling and takedowns:

Though it was the overhand strike which dropped Ortiz that really put points on Benavidez’ card.

It was was nearly lights out for Benavidez later in the match, as Ortiz sunk this RNC toward the end of Round 2…but did so too close to the bell to squeeze out a tap:

Despite the rocky second round, Benavidez came back strong in Round 3, pressure gaming Ortiz into defensive scrambles which stymied any moment he had gained in Round 2 and ultimately winning the match.

Benavidez wrapped up the night by calling out current flyweight title holder Henry Cejudo, who he defeated in their 2016 bout. Should the flyweight division continue Benavidez has earned his title shot. His current record stands at 26-5-0.