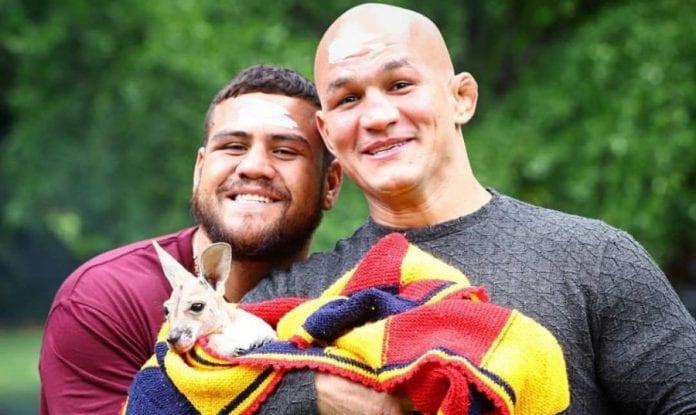 Junior dos Santos and Tai Tuivasa are set to beat the crap out of each other in Adelaide, Australia on December 2, but before the brawl, they took some time to bond.

The opponents were the objects of a “welcome ceremony” in Tuivasa’s native Australia. The photographer asked dos Santos to hold a joey for the photo… and then asked Tuivasa to hold dos Santos in a friendly embrace.

This is a lovely sport MMA one day you could be cuddle buddies the next be punching the **** out of each other 😊 like I’ve said JDS left a great impression on me yesterday by embracing my culture but we gotta go to work and Sunday is gunna be exactly that. This is gunna be a fukin banger so make sure you tune in cause this might not last long. 👀 #respect #heavyweights #heavyhitters #ufc #adelaide #bambam #FTA #westernsydney #letsgo #australia #standthefuckup #wehadagirl #familyphoto #laugh

Dos Santos laughed as he told MMAFighting.com, “This photographer [the UFC] took there, I don’t know when they found him. I guess he doesn’t have much experience with the fight business, because he asked me to hold the baby kangaroo and then asked Tai Tuivasa to hug me. I was like, what the f*** is this? He wanted to take a family photo. To make it worse, I look like a mom holding a baby.”

The two had previously engaged in a bit of verbal sparring online, but after the experience with the kangaroo, it seems that the tension between them has dispersed (at least for now). Even when they faced off for the first time, they couldn’t keep their faces straight — dos Santos said that Tuivasa couldn’t stop thinking about the baby kangaroo, and the result left both fighters laughing instead of trying to intimidate each other.

It’s unlikely that these two will retain that lightheartedness when they square up at the main event on December 2 at UFC Fight Night 142, but no matter who wins, they can both fondly look back on the silly (and let’s be honest, adorable) moment they had with a joey.