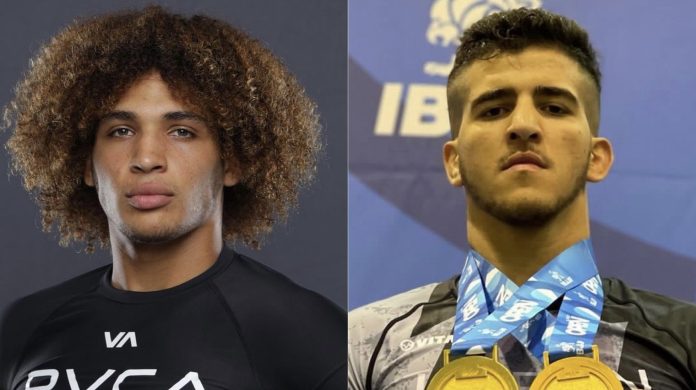 ONE title challenger Matheus Gabriel’s had a busy week – as expected when you’re days away from challenging the youngest ADCC champion in history for a world title in submission grappling. Arguably anyone going up against Kade Ruotolo in his weight class would be entering the ONE Circle as an underdog at this point. Matheus, though, doesn’t let that faze him.

When Matheus and I get a moment to chat amidst the chaos of his training schedule, he’s relaxing in his hotel room after a hard day on the mats, and happily preparing to tuck into a highly-anticipated pasta order from room service – possibly taking a page from ONE flyweight champ Mikey Musumeci’s book there. “I’m good on weight!” he promises with a good-natured laugh.

“I know myself,” Matheus tells me. “I’m always confident in myself. If I’m the underdog, I actually kind of like it.” After all, being the underdog puts him in the perfect position to shock the audience – which is his real goal.

“I want to surprise people,” he explains. “I want them to go, ‘Wow, who’s that guy?’ Because I know this is my debut – I haven’t fought in ONE yet – so I’m the underdog, and that’s no problem; there’s no pressure, you know? I like being the underdog, so I can surprise people.”

It helps that Matheus was already an established phenom in his own right in elite adult divisions back when Kade was still a juvenile. “It’s crazy because both of the Ruotolos were kids not that long ago,” says Matheus. “And I remember thinking, ‘Oh, these kids are really good,’ but I didn’t realize we’d fight a few years later! So, it’s crazy to fight against Kade. He’s very young, and he’s so talented.”

“I’d been training a lot, both gi and no-gi, and I was fighting in the gi, when I got noticed by ONE Championship,” Matheus remembers. “And I thought, ‘Yeah, let’s go! I want to challenge myself.’” He grins. “And when I found it was for the title, I was like, ‘Let’s go, I want to get that belt.’”

Like both Ruotolo brothers, Matheus has seen success in both gi and no-gi competition. However, where Kade has earned most of his biggest wins on the no-gi scene, Matheus is almost the opposite, collecting more prestigious victories in the gi.

Nevertheless, Matheus doesn’t worry too much about facing Kade in no-gi. “I don’t have a problem [switching between] gi and no-gi,” he says. According to Matheus, he regularly trains both throughout the week. “I like to do both to be prepared for any fight,” he explains.

That said, ever since getting the title shot offer, he’s dialed back his gi training a bit in order to focus on a no-gi ruleset, so he can maximize his chances at victory in the ONE Circle. Ambitious as he is, Matheus does have over a decade of jiu-jitsu competition under his belt – and he knows better than to take an opponent of Kade Ruotolo’s caliber lightly, particularly after witnessing Kade’s ADCC 2022 run.

Matheus is determined to make the most of a ONE title shot, which he sees as a once-in-a-lifetime opportunity. “When I was doing the press conference, I was in shock,” he confides with a smile. “It’s crazy, being here. I kept thinking, ‘No way. Thank you, God.’”

“My story’s a hard one,” he adds. “I don’t come from a [well-off] family – my family has a humble background. I’ve been fighting a lot to get here. I came from the bottom.”

Prior to our chat, Matheus had been on the phone with his family. “My grandmother was crying,” he tells me. “She kept saying, ‘I’m so proud of you, and where you are right now.’ And I told her, ‘This is just the beginning.’”

“It’s an honor to be a part of ONE Championship – it’s a huge accomplishment for my career, to join all those legends who have been a part of ONE,” says Matheus, who has long admired many of the retired stars who built their careers in the Circle. “I watched all of them [compete here], and now I’m at ONE Championship! It’s so crazy.”

“I believe that ONE Championship is going to be the top promotion in the world,” he adds. “They treat athletes so well. It’s amazing. This show is awesome. I’m so comfortable over here. They really take care of their athletes – especially our health. That’s one thing I really like about ONE Championship – the way they handle health.” He’s a big fan of ONE’s hydration tests, which he believes is a strong step toward promoting safer weight cuts for athletes.

“I didn’t come here to do a boring match,” Matheus says, grinning. After all, he’s got his eye on that $50,000 bonus money. “We go in there to kill or die. One of us is going to get that sub. We’re excited.” He laughs. “And I’m looking forward to that bonus!”

Don’t miss this explosive showdown this Friday on December 2, 8 PM EST, at ONE on Prime Video 5, streaming via Amazon Prime.