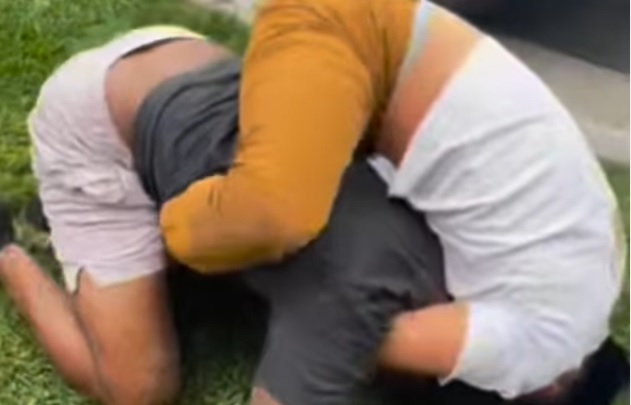 Yet another public jiu-jitsu throwdown has gone semi-viral – this time over what appears to be a long-simmering feud over a parking dispute. A video of the altercation was posted on Instagram earlier this week by jiu-jitsu black belt and Gracie Jiu-Jitsu Laguna Hills instructor Arman Fathi.

According to Fathi’s caption on the video, his student Gabriel had previously gotten into a disagreement with another man in his neighborhood regarding a parking space. Although the disagreement took place “some time ago,” the neighbor apparently continued to harbor resentment over the matter. Fathi claims that the neighbor attacked Gabriel one day, and began swinging.

Gabriel reportedly reacted with a double leg takedown, and secured mount on his alleged attacker. On the recording, the neighbor – called “Elijah” by his female partner on the video – complains that Gabriel’s trying to choke him. Gabriel, in high mount, retorts, “You want to run at me, bro, at full speed?”

Elijah claims to be unable to breathe, to which Gabriel retorts that he’s giving him space to breathe. The two tussle briefly while Elijah’s partner pleads with both men to stop, at which point Gabriel takes Elijah’s back. Throughout the altercation, Elijah’s partner continues her attempts to deescalate the fight, pleading with Gabriel to let Elijah go. Gabriel’s brother Angel – who at this point, is filming the altercation – refuses, claiming that they want to wait until the authorities arrive.

Eventually, the two men disentangle, as Gabriel asks Elijah’s partner, “Is he going to calm down?” The dispute appears to peter out from there. No striking is seen on the video.

In a caption on the Instagram post, Gabriel’s jiu-jitsu instructor writes, “[Gabriel] tells me that before he started training Jiujitsu he probably would’ve started swinging at the guy nonstop, which would not have been a good scene, especially considering that the guys lady and kid were there trying to break things up. Gabriel was acting strictly in self-defense, neutralized the situation, and did not take any damage nor did he dish any damage to the other guy. The dude left with a bruised ego but nothing else, essentially walking away after he was outmatched by someone he outweighed by roughly 50 pounds.”