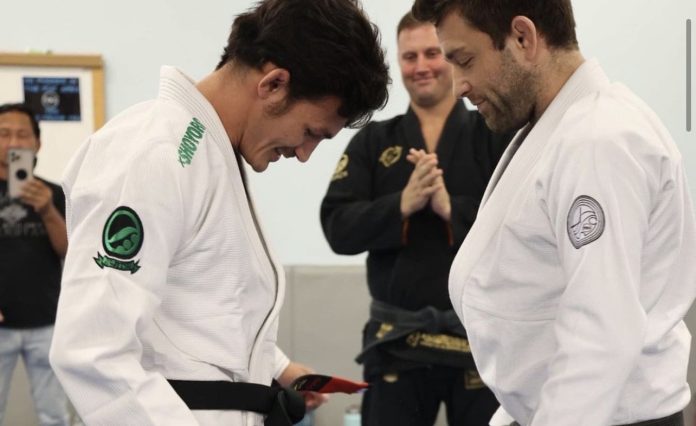 Widely regarded as a knockout artist, Louisiana-native Thanh Le has been putting in the work to be a well rounded fighter and now holds the credential of Black Belt to prove just how far his commitment goes.

Le expressed his gratitude for the promotion on social media, and explained how Jiu-Jitsu once was a part of his martial arts training out of necessity, but has now become a cornerstone of his regiment that he enjoys,

“What an amazing night last night.

I was extremely honored to receive my black belt from @ryanhall5050. I had no idea that the fam made plans to come all the way out to VA, and man, what a surprise it was.

This journey started with me learning jiu-jitsu bc I HAD to… which relatively quickly turned into learning jiu-jitsu bc I WANTED to. What originally started as a “just learn enough so I can stay on the feet in fights” naturally molded it’s way into a passion driven desire to learn as much as I possibly can. There’s a genuine love that I have for this art that @smgayton @ryanhall5050 & @adambenayoun have mentored me through. I been trying to tell y’all, 2nd to being a striker, I’m a jiu-jitsu dude! 😂 It’s been an amazing growing process that has taught me so much about life, martial arts, competing and so much more. I am forever grateful for meeting these two gentlemen and having them as amazing friends in my life. Thank you to the endless list of training partners between my gyms @midcitymma @5050academy & @mooncollegetkd. The learning will never stop and the pursuit of moving in a positive direction constantly is what wakes me up in the mornings… along with Mina of course 😉”