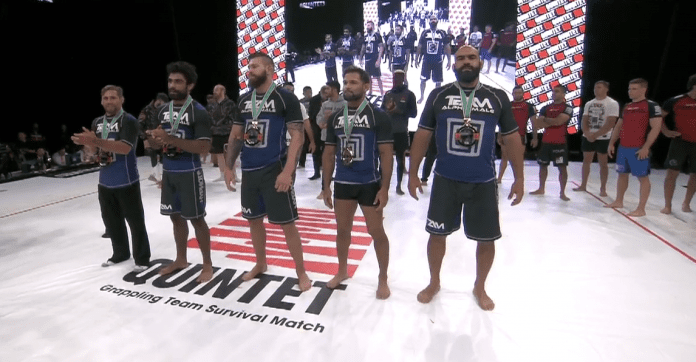 Boasting the most exciting format in competitive submission grappling, Quintet made its American soil debut in Las Vegas on October 5. For a full breakdown on Quintet’s team breakdown and featured matchups, click here.

Quintet 3 got off to an agile start with a featured match between 17-year-old “prodigy” Nicky Ryan (little brother of teammate Gordon) and Bellator veteran Hideo Tokoro of Team Sakuraba. After a brief exchange of leg shots and hand fighting, young gun Ryan slipped behind Tokoro for a quickly sunk body triangle and submission by RNC.

Nicky Ryan gets the RNC in the opening special bout of the night! And he’s only 17! #QUINTET3 pic.twitter.com/NWQTGFRf9q

“Team captains” Uriah Faber of Alpha Male and Kazushi Sakuraba of his self-named squad showed down in the first of the team matches. Faber, who regards Sakuraba as an “idol,” dominated the match with heavy top pressure and wrestler’s flair. Despite a few takedowns and ankle/toe lock attempts mostly by Faber, the face-off ended in a draw.

Two @UFC Hall of Famers @KS_SAKU39 & @UrijahFaber on the mat together!

They start the 5-on-5 team grappling action at #QUINTET3! pic.twitter.com/VKsG0bkWpS

Big dogs Daisuke Nakamura and Antoine Jaoude followed up with another draw, mutually scrambling but neither finishing their attacks in the brief 4-minutes allowed for their disparate weight classes.

The hotly anticipated Quintet debut of ADCC champion Gordon Ryan kicked off against veteran Viking Josh Barnett. Ryan actually chose a bottom approach at the open, pulling off a butterfly sweep of Barnett’s 200+ pounds of dark matter before advancing to a triangle choke for the victory.

Ryan faced against Marco Souza next, the first back-to-back performance of the night. Ryan made quick work of Souza, landing an early takedown, tiring Souza from mount, and enduring a brief referee reset (Quintet is militant about keeping the action going with constant submission attempts and no stalling) en route to the ultimate back take. Like his brother earlier, the win came by trapped-arm RNC.

10th Planet’s PJ Barch exploded out of the gate against team Polaris’ Vitor Ribeiro, both opponents toppling into a chain of roly-poly position exchanges. Barch made it into the dominant position by way of relentlessness, with Riberio struggling to slow down the pace and implement his methodical approach to submissions. Riberio successfully fended off several arm and knee bars before Barch locked in a ruthless surprise upset by armbar in the last 30 seconds, one of the most exciting finishes of the night.

Barch immediately faced Polaris’ Gregor Gracie, with Barch launching another energetic conveyor belt of submission attempts after recovering from an early sweep by Gracie. The belt came to a screeching halt as Gracie caught both of Barch’s legs in a triangle which he spun, like an evil spider, into a lighting fast kneebar for the “W.”

Gracie was matched up with 10th Planet’s Amir Allam next. Gracie countered Allam’s early mounted guillotine, setting off a seesaw of position reversals that ended when Gracie grabbed a kimura and torqued it into an armlock the win.

A now noticeably fatiguing Gracie was bested inside of 2 minutes in his 3rd match, this time against Geo Martinez. Finding himself in an unenviable checkmate, he tapped to an armbar while defending a kimura.

Geo Martinez advanced to face Polaris’ Marcin Held, who felled Martinez by kneebar during a joint exchange of leg attacks.

Geo Martinez transitions from a Kimura to an armbar to stop Gracie’s submission streak at 2! #QUINTET3 pic.twitter.com/DKzPcpjY4g

Martinez met his match in Polaris’ Craig Jones, who scored the fastest submission of the night with an epic footlock that left Martinez limping off the mat.

Jones closed out the bracket against Adam Sachnoff. Sachnoff got hit with stalling, and despite a solid leg lock attempt was unable to defend against Jones’ reversal to smothering and RNC.

A textbook example of what happens when two elite grapplers go head to head, Quintet 2 star Rida and black belt Nunes didn’t have the most exciting featured matchup of the night but showed off their unique assets as fighters. Rida’s flexibility saved him more than once, while Nunes showed the power in taking over and then resetting the pace of a bout. Rida mostly pursued toe holds and leg locks while Nunes hunted for takedowns and the opportunity to slow his opponent from mount. It was there that he composed at head and arm choke that led to victory over Rida.

The feature match between Olympic Judo champ Satoshi Ishii and UFC veteran wrestler Frank Mir was like watching two grizzly bears fight in a circus ring. Mostly a standup battle of push-pull weight game and hand fighting, the only takedowns were scored by Ishii. (The Judo medalist had said pre-fight that Mir “cannot take me down,” though he was unable to advance the takedowns into submissions.) Both fighters were called three times for stalling—technically a double disqualification—before the match went into a “golden score rounds,” aka Quintet’s untimed final tie-breaker round. Ishii took the win in overtime by DQ after Mir was called a final time for stalling.

Fresh fighters Dustin Akbari and Dan Strauss, neither of whom were called to compete in the semifinals due to the quick wins of their teams, kicked off the finals. Aggression from Akbari caused Strauss to pull guard early on, but Akbari’s pressure quickly brought the match back to its feet. After another scramble, a stalling warning for both fighters, and a flying triangle attack by Akbari the matched ended in a draw

Mansher Khera and Marcin Held squared off with Held stealing an early leg lock attempt. Khera briefly scored the top position, with Held countering by going for the legs again. Position waffled back and forth, but the match ended in a draw.

Polaris’ Jones returned to the mat to face Antoine Jaoude, pulling guard on his significantly larger matchmate. The pair were reset by the ref quickly, with Jaoude opting to stand and Jones immediately climbing him like a cypress to lock in a standing RNC for the win.

3 men remain for both Team Alpha Male and Team Polaris! Tune in NOW on #UFCFIGHTPASS to see who leaves victorious at #QUINTET3! pic.twitter.com/rR71xOTsll

The hotly anticipated pairing of Jones and Alpha Male’s Gordon Ryan, a rematch of their EBI 14 finals match, was one of the hoped for draws of Quintet 3 and viewers got what they wanted. Ryan wasted no time going for the takedown, shooting for a single leg but falling into Jones’ tight guillotine on the way down. After a struggle, Ryan freed his neck and advanced to mount. Smothering Jones’ with top pressure while attacking the arm, Ryan eventually pushed Jones to attempt to turn out of the position—a fatal error that put Jones in a jaw crank that cost him the match.

Ryan took centerstage against Vitor Riberio. Again Ryan pursued the first takedown, bodying locking “Shaolin” into his side control. Soon thereafter he shimmied his way into yet another body lock and suffocating RNC. Trapping the arm again, he worked for the choke but ended up finishing the match by armbar.

With only a draw or victory needed to win the finals, an unflagging Ryan finally stepped up to Gregor Gracie in an attempt to snatch victory from Team Polaris. Gracie led with a back take, but Ryan rolled down and out to safety. Slowing the pace, the pair briefly exchanged leg locks before a silent audience hoping to see a spectacular finish. The ref stepped in on the mutual locking and reset due to stalling. Ryan attacked with a sliding arm drag to back take, moving into mount. Smothering Gracie with a head and arm lockup, Ryan eventually wore his opponent down in exhausting Danaher style and prevented any effective submission. The clock ran down, a draw was declared, and Ryan—as well as Team Alpha Male—were declared the winners.

The victory marks the first for Team Alpha Male at Quintet.